One of the oldest buildings in the Mississippi Valley

Good Friday 1788, New Orleans is burning.? Half of the French Quarter is burned down to ashes.? Among the surviving buildings: the Ursuline convent.??

There are only a few architectural signs of the French colonial presence remaining in New Orleans; and there is no doubt that the great fire of 1788 is the main reason for it, making the Ursuline Convent one of the rare examples of what the city might have looked like if history had taken a different path.??

The building has fulfilled many roles throughout its existence.?Over the past two centuries, it was a convent for the Ursuline nuns, an archbishopric, a Catholic school for boys, a public school, a legislative seat for Louisiana and finally an archives center for the Archdiocese.?? 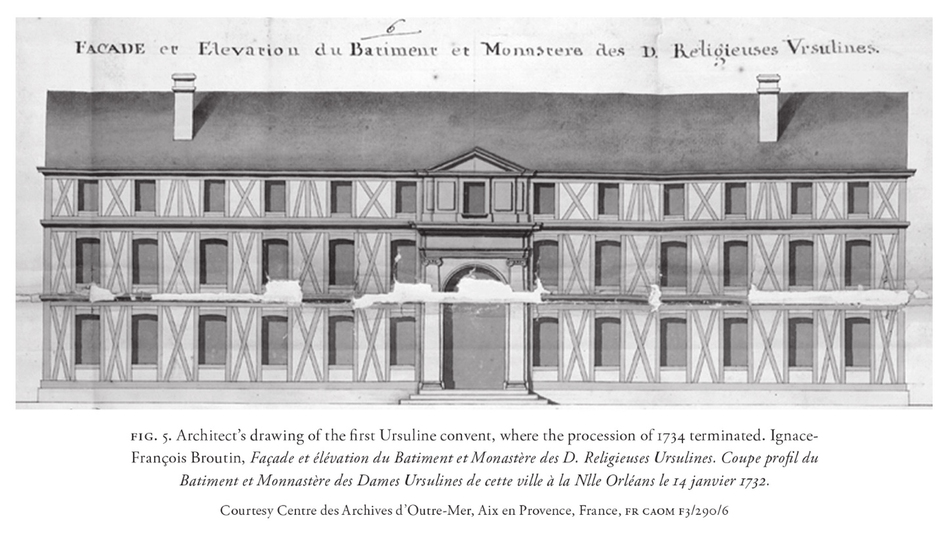 A first building was erected in 1734, but it deteriorated quickly.?With a humid subtropical climate, the apparent half-timbered structure didn’t last long.? A second building was designed and built in 1745 by Ignace François Broutin, who was also the architect of the first convent.?Made of bricks covered with stucco, the new building is typical of French neoclassical architecture.? It is a functional and symmetrical construction, unique in its lack of ornamentation. Only the slightly arched central window, set with moldings, and the narrow central pedimented pavilion break the regular rhythm of the fenestration. The large hipped roof, embellished with small low dormers and contrasting with the facade of multiple windows, completes a building of refined proportions.? 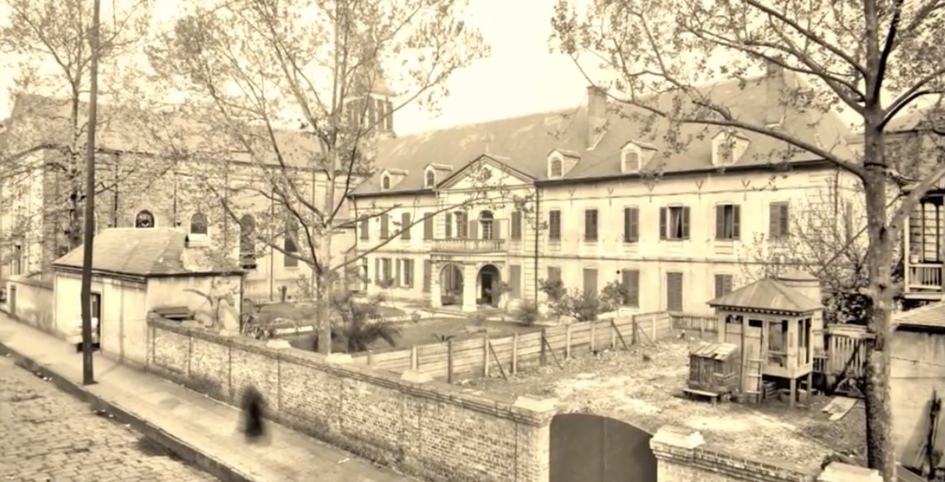 At the time of the Ursulines, the ground floor consisted of a dormitory, classrooms, the refectory and the orphanage infirmary.? The second floor contained the sisters’ apartments, a library, another infirmary and storage rooms.?The spiral staircase, which is visible from the main entrance hall, originates from the original convent and has been reinstalled in the new building.?

The first sisters, sent by Louis XV, arrived in New Orleans in 1727 from the convent of Rouen, to supervise the royal hospital and the education of young girls.

During the first years of its operation, the convent was a refuge for the underprivileged but also a source of education for the population. The sisters focused their attention on young women’s education and were indifferent to their ethnicity or social condition.? As the first educational center of the colony, the convent was, along with St Louis Cathedral and the seat of government, a proof of stability and growth in this distant and often neglected colony, whose name, at the end of the French period, ended up evoking exile and punishment for the subjects of the King of France.?????????

The French period was put to an end with the arrival of the Spanish in 1763.?Under Spanish rule, governor Alejandro O’Reilly removed the medical function from the Ursuline convent’s missions.?The nuns therefore devoted themselves almost exclusively to education.? As early as 1778, the first Spanish-speaking sisters arrived from Cuba, reaffirming the power of Spain to establish institutions.?During the following eighteen years, the new management reinforced the learning of the Spanish language and culture, despite the traditional preference of the population for the French language and culture.?The tensions between the two communities, frequent in the colony throughout the Hispanic period, had repercussions even in the convent, and the dissensions between the sisters appeared in broad daylight. 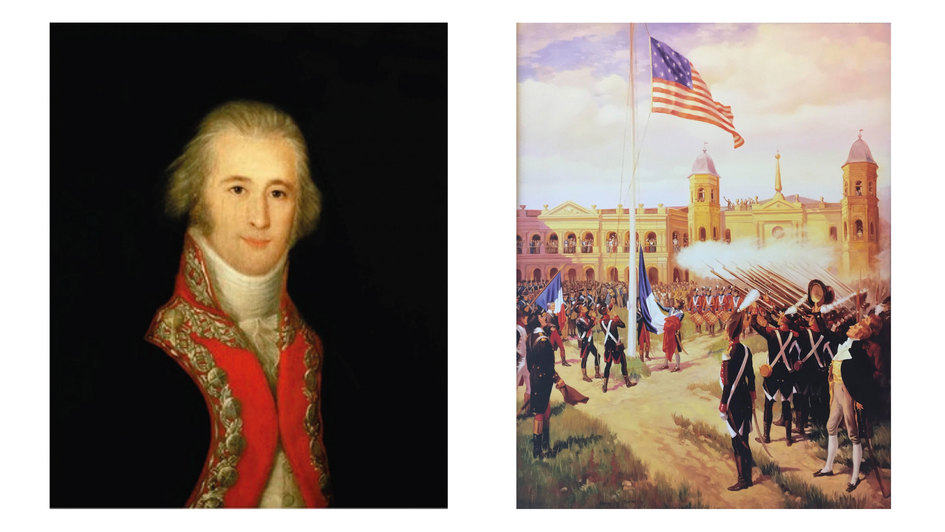 At the end of 1803, after tough negotiations between France, Spain and the United States, Louisiana was sold to the Americans in: ’’ The largest real estate transaction in history’’? The news of the imminent transfer of the territory to the United States caused some uneasiness among the majority of the population.? After many Spanish nuns left for Havana, the Ursulines who remained in New Orleans were worried about the future of their property as well as their educational function under the new American flag.? An article in the Parisian newspaper l’Univers spread rumors that the US government was considering removing the convent from the sisters. The sisters’ concerns eventually reached President Thomas Jefferson, who wrote to them personally and assured them that their work would not be interrupted, but encouraged. ?With his support, the nuns carried on their mission at the convent, which at the time was the only institution providing daily education in the city.????

In 1823, city officials announced that current Royal and Governor Nicholls streets would be extended, severing the nuns’ property.?They decided to move to one of their plantations located about four miles down the river, further south of the city.?A new and spacious convent was built on a site that is now the industrial canal.? After 1899, the convent served as an office and presbytery for the adjoining Sainte Marie church.? 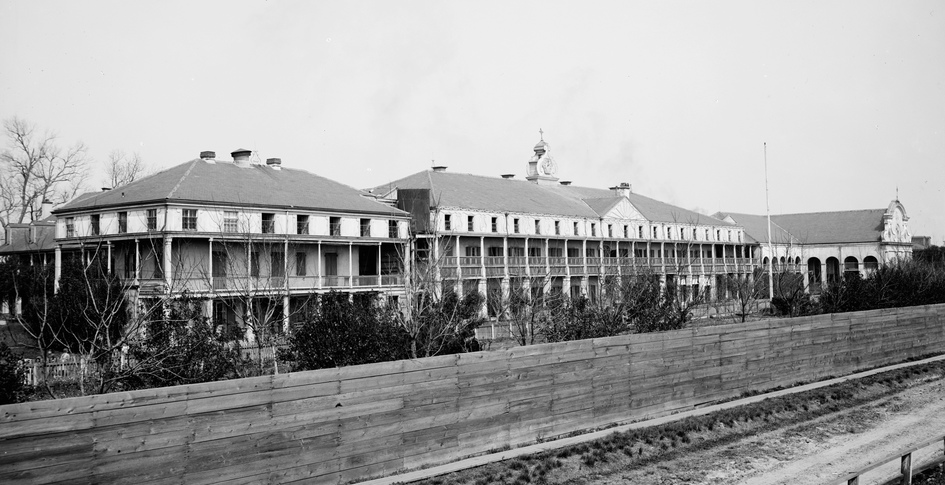 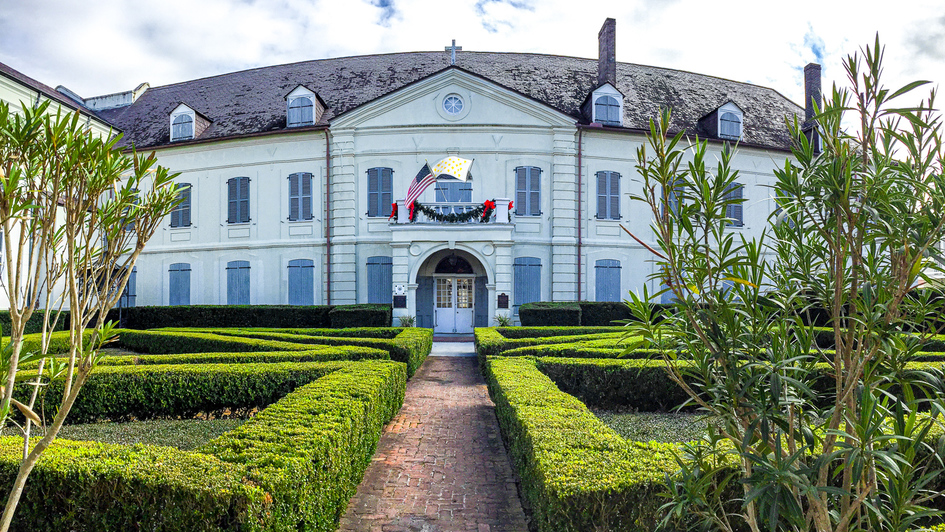 French influence and culture were predominant in the region until the end of the 19th century, and French remained the main language in many schools and parishes.??

This building remains one of the main symbols of French colonization in Louisiana and serves as a testimony to the religious dimension of education in this state.?