Home > France-Louisiana relations > The 2406 Dialogues > All Art is Quite Useless: A Debate on Art in Contemporary Society

All Art is Quite Useless: A Debate on Art in Contemporary Society

Join us on Tuesday, May 15 2018 from 5-7pm for the next edition of The 2406 Dialogues. We are pleased to welcome four panelists from various artistic backgrounds to discuss the New Orleanian art scene the role of art in contemporary society. 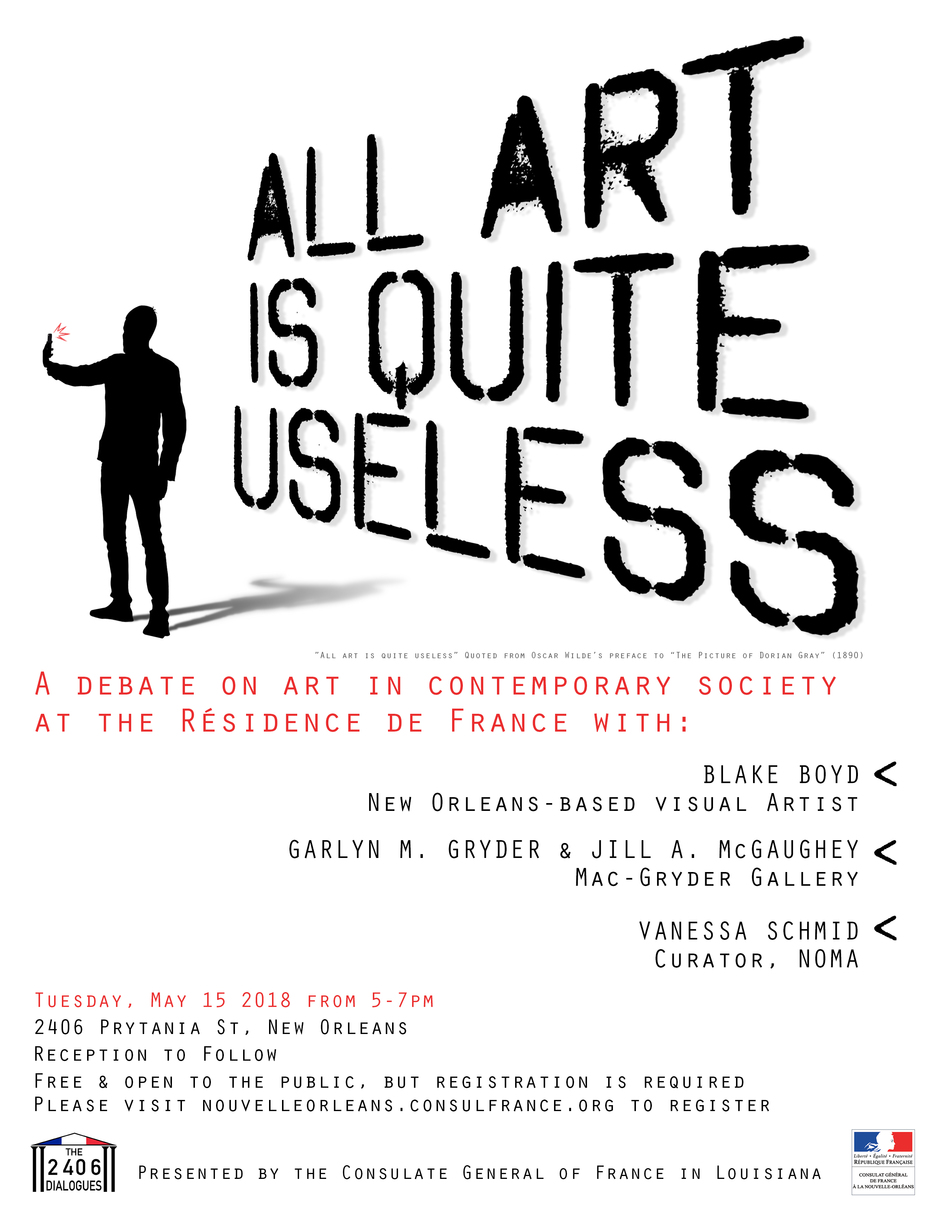 In the age of smartphones, we can all be the creators, curators, and distributors of our own work. 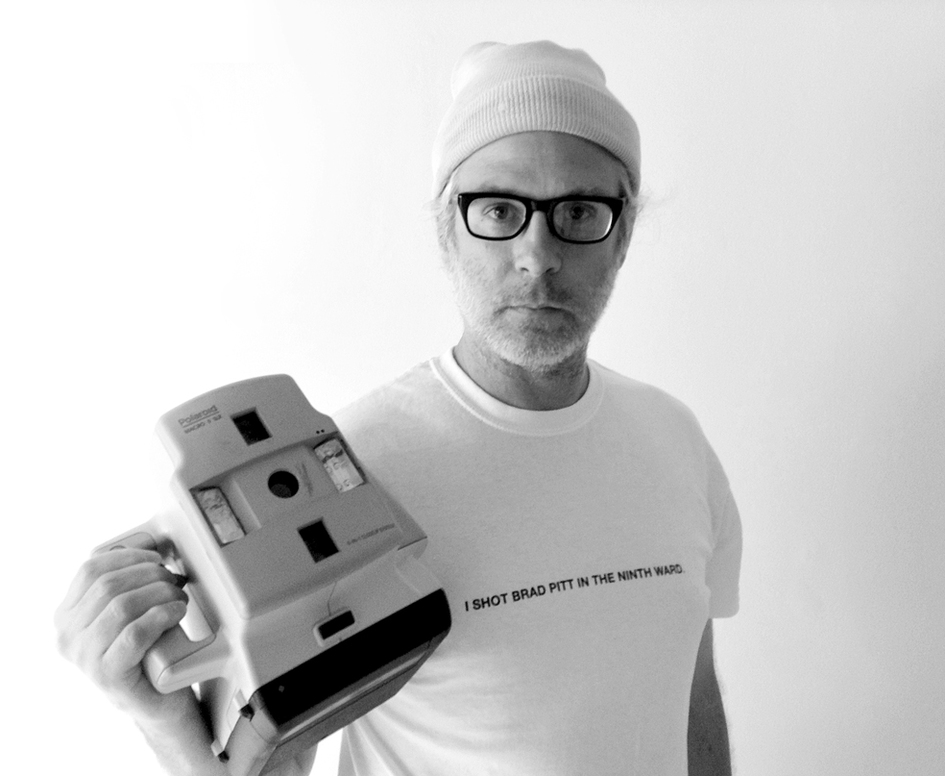 Blake Boyd was born in Slidell, Louisiana and grew up around the studio of a well- established local artist. At 16, Boyd became his assistant, an experience which evolved into a 14 1/2-year apprenticeship working in the pre- Renaissance technique of gold leaf applied to a mixture of clay and glue. After high school, he was accepted to the Memphis College of Art.

He began showing at the Miriam Walmsley Gallery in New Orleans at age 19. He has his first solo show three years later at Hall-Barnett Gallery. In 2003, Boyd had his first solo show at Arthur Roger Gallery where he showed until recently. He is now represented by b o y d | s a t e l l i t e .

Blake Boyd’s art exhibitions are conceived as multimedia installations. He is a conceptual artist who works in various mediums including paintings in clay, gold leaf, blood (his own), wine (Chateauneuf-du-Pape), sculpture, instant photography (photobooth and Polaroid), video and site-specific installation.

There is direct reference to Disney pervading the artist’s imagery. This is reverence to the domestic icons of Boyd’s youth, his family members worked at Disney World, which opened in 1971 on Boyd’s first birthday. Boyd reinterprets the imagery through different media working with bole and water gilding, elevating pop similes to venerated iconography, a comment on contemporary cultural values.

Boyd’s mentors in photography are Billy Name and Andres Serrano. Combining the candid shots of Name with the studio portraiture of Serrano, Boyd’s current photography projects are thematic documentary collections of portraits of contemporary personalities. Collections include members of Andy Warhol’s Factory, London in the mid 1990’s, Kenneth Anger and, since the tragedies of Katrina, the BP oil spill and recent floods, vital Louisiana personalities. 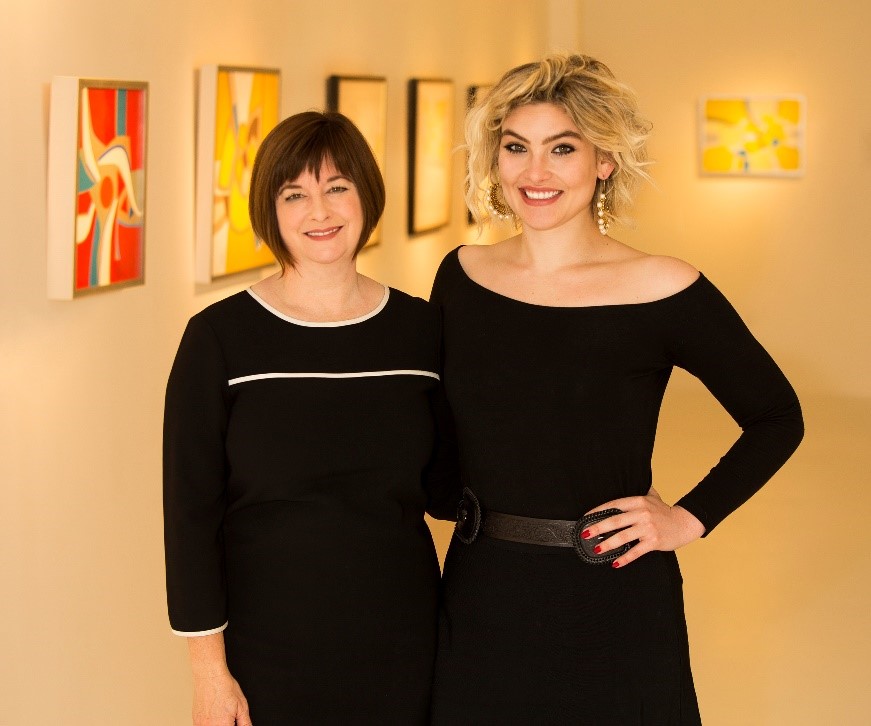 A native of the Gulf South, Garlyn Gryder was educated in Voice and Studio Art at Loyola University New Orleans and received her Bachelor of Arts in the History of Art from Tulane University. Garlyn obtained her Master of Arts in Fine and Decorative Arts from Sotheby’s Institute of Art in London, where she specialized in Modern Art. Her dissertation, “Alchemical Symbolism in the Ready-Mades and Alter Ego of Marcel Duchamp,” received distinction. After studying and traveling extensively throughout Europe, Garlyn returned to New Orleans to co-found the Mac-Gryder Gallery on Julia Street with her mentor and partner Jill McGaughey.

A native of Minneapolis, Jill attended the University of Minnesota’s Liberal Art College, studying English Literature and Studio Arts until her third year when a freelance opportunity inspired her to put her degree on hold to become an entrepreneur. She founded a company, Catalyst, to provide project and editorial support for advertising agencies and other freelance copywriters and graphic designers. Success in the business world allowed her to start collecting art and promoting art exhibitions, and she moved to New Orleans in 1999 to be part of the vibrant art community and pursue a full-time career as an art dealer. She has helped direct Duque Art Center, Bryant Galleries and recently the Vincent Mann Gallery where she handled the work of modernist Françoise Gilot for ten years before co-founding Mac-Gryder Gallery in 2017.

The Consulate general of France in Louisiana launched The 2406 Dialogues debate series in December 2017. The name is inspired by the address of the Residence of France at 2406 Prytania Street, where each event will take place. Our goal is to open our diplomatic and consular mission with the general public and foster a discussion on current events. Topics include cultural, social and economic matters most relevant to Louisiana’s civil society. While we may raise more questions than answers, we are called to reflect on the actions that we can take surrounding the key issues that concern us all.