Francophonie takes on an infinite number of forms within the "most francophone State in the US". We’ve launched the "Three Questions" series to explore the diversity and vitality of Francophone culture in Louisiana. 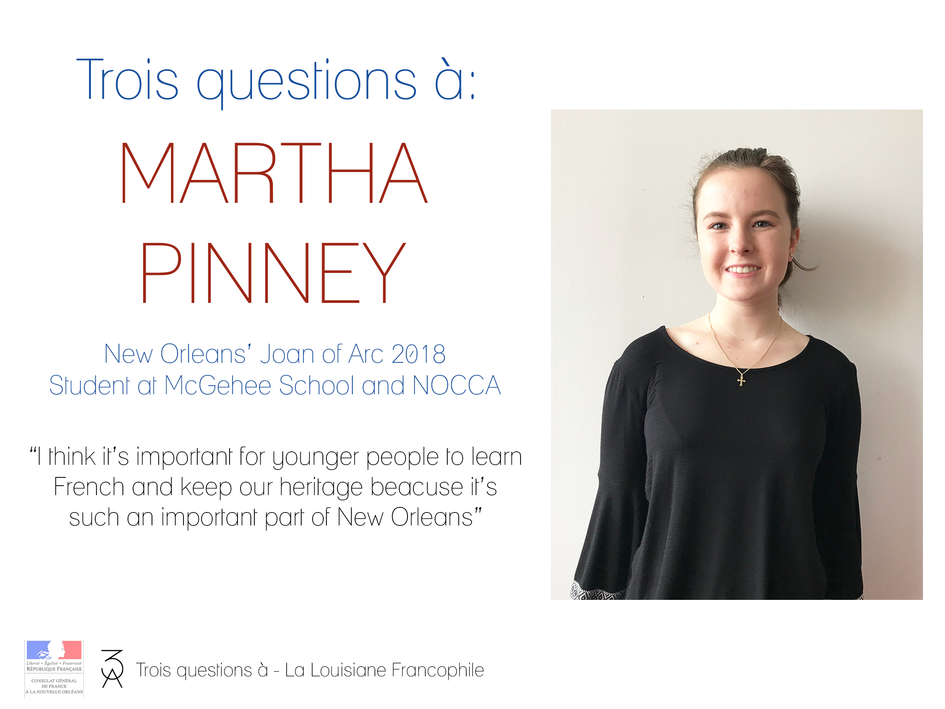 My name is Martha Pinney, I’m 16 years old, I go to McGehee School and NOCCA, and I’ve lived in New Orleans my whole life. My family is 100% American but my mom is a French teacher, and she likes to incorporate as much French culture into our lives as possible. It’s cool that Mom became obsessed with this culture and started going over to France and making friends. Now I feel like we are French, even though we’re really not. We do stuff like eat salad after the main course, we have a cheese course sometimes, and my parents have a glass of wine with dinner. It’s just little stuff like that. My mom just loves everything French! People come over and say “Oh, you’re French right?” and I say no, not by blood, but definitely culturally!

I’ve been studying French for three years. My mom actually wanted me to take Spanish, because she didn’t want to eventually have me as her student! Throughout my whole life, we’ve had a lot of French families and French students stay with us at our house. I always loved hearing my mom speak with them in French, like it was nothing, like it was English, and I always wanted to be able to communicate with these people too. Also, we have family friends that are my age and live in France, and it’s cool to be able to communicate with them and keep in touch in French. We usually stay with them when we go to France, and I try to keep in touch with them almost everyday on my phone with snapchat.

How do you use French in your everyday life and what does it mean to you to be a French speaker in Louisiana?

I think it’s important to be able to communicate with other people in their language. Language is one of the most fundamental ways of communication. Especially since the French have such a tight bond with this city, it’s good that I can communicate with them. I can feel a connection with these people and talk to them instead of having this gap, this language barrier. It’s important to be able to bridge our cultures through language.

It’s cool when I’m leaving school and see tourists from France that seem lost and I can help them with directions. It’s exciting, because they’re always so excited to hear someone speak their language, which I think is really cool because it just kind of emphasizes that French bond that we have. And you don’t get that everywhere. Whenever I’ve traveled to other cities or states outside of Louisiana, you rarely hear people speaking French or any language other than English.

At school, I have French class about three times a week, and with homework I’m working on French everyday. At home sometimes I’ll speak French with my mom, if we want to talk behind my dad’s back right in front of him! I like to speak in French, and keep up with it as much as I can. There are some people at McGehee that speak French. There’s one girl that went to Ecole Bilingue, and sometimes we speak French together, it’s kind of our secret language, which is really cool!

I definitely feel like Louisiana of course, and especially New Orleans used to have a lot more French-speaking households. Today I’ve noticed that you really don’t hear a lot of locals speaking in French. I think it’s important for younger people to learn French and keep that heritage, because it’s such an important part of New Orleans and it’s sad to watch it fade away. I think that keeping French alive as much as possible is great, keeping bilingual schools and keeping links and forming bonds, like what we just did with Orléans, is really important because it keeps New Orleans as that little gem of French in the whole country.

Can you tell me about your experience with Jeanne d’Arc?

I was six when the parade began, and that was my first experience going and being in it. My mom made me a little lamb costume and I walked the whole way, it’s a long parade! I’ve done it every year since, and I remember always really wanting to be Joan of Arc. She was always this older girl that I looked up to. She always looked so pretty on the horse, so poised, and she would present a French speech. That also inspired me to keep up with my French and pursue French in school.

This past January I finally got to be Joan of Arc, and I’m actually going to Orléans to take part in their parade, meet their Joan of Arc and their Mayor again! He actually came to New Orleans for our parade, with a lot of other people from Orléans. It was really special this year because of the Tricentennial and also because it was the 10th anniversary of the parade, a lot of things were perfect this year! I got to meet the Orléans Mayor and a lot of different people that were involved in the French parade. I had to present a speech to them in French, and afterwards they were saying how great it was that I was speaking French. Now I have the chance to go to Orléans and be a part of their parade over there, which is much bigger! I wouldn’t have been able to do any of this is I hadn’t been taking French and keeping up with it.

How do you hope to use French after you graduate?

I think that first of all, being bilingual is really important no matter what you do. If you ever work with people that speak that language in the future, that’s always something you can use. I’d like to study abroad in college, and of course I’d love to keep up with my French friends. It’s nice because if they ever travel here or if I ever travel there, we can keep in touch, stay at each other’s houses and keep that bond. I feel like I just have a better connection with the world, because in America the majority of the people only speak English. Being able to speak French as well, I feel like I can travel to other places and be more comfortable there. I’m obviously interested in France, but also Canada and Africa, and pretty much anywhere they speak French!

I can imagine myself using French professionally, it really opens up options. If I can’t find a job here, of course I could move to a different country, or if I’m working for a company that wants to connect with a company in a French-speaking country, I could help with that. It just kind of gives me a leg up in pretty much everything!