Trois Questions A: Katrina Greer, founder and creator of The French Library in New Orleans [fr]

Francophonie takes on an infinite number of forms within the "most francophone State in the US". We’ve launched the "Three Questions" series to explore the diversity and vitality of Francophone culture in Louisiana. 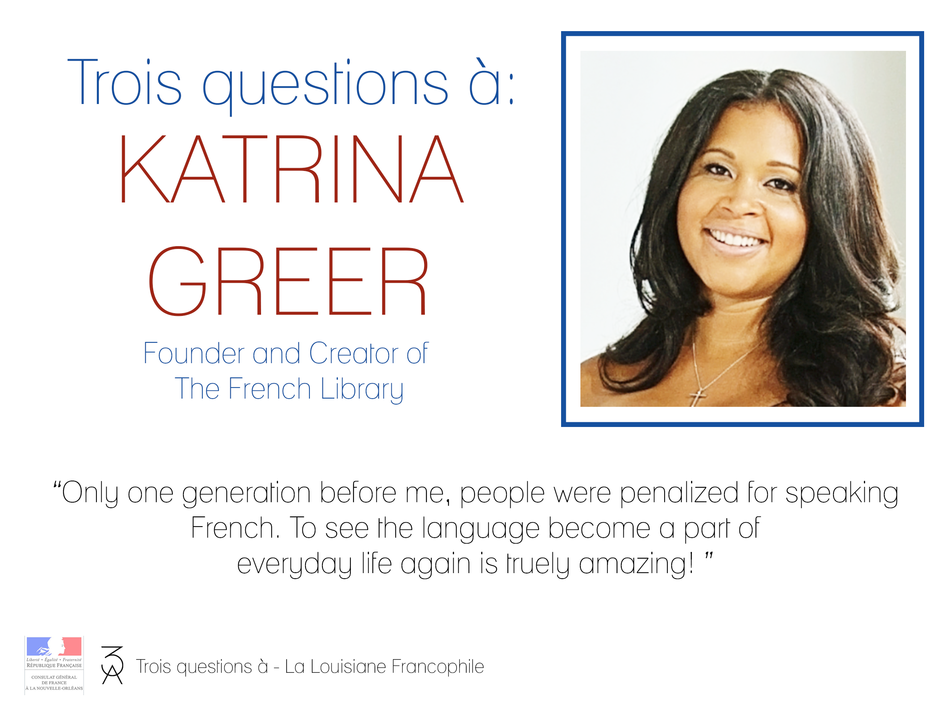 My name is Katrina Greer and I am the founder and creator of The French Library. We are a French children’s bookshop that has evolved into a family hub within the city of New Orleans. Our mission is to provide current and contemporary French literature for young readers in the city and the growing French immersion population.

Why open a French children’s library in New Orleans?

There are two reasons. On the business side, there were practically no French books to be found nationwide, and I thought to myself, why don’t I fill a niche? On the emotional side, my father spoke French, he went to McGill in Montréal, and my children are in a French immersion program. When my eldest started reading, we realized we couldn’t extend his education outside of school. I couldn’t find books in French about Pokémon or Harry Potter or any of the things that he was interested in without going to France or Montréal. There was a small French section in Barnes and Noble, which had “Le Petit Prince” and “My First 100 Words in French”, very basic books. I also realized that I couldn’t get these books online, other than through French Amazon, which had astronomical shipping rates. So I thought why not open up a little shop?

The original concept was just a little hobby shop where I could drop my kids off at school, come and open up the shop, and then sit and read all day. Maybe one or two customers would come in and I could help them source French books for their children. My husband laughs about it now, because that was the pitch that I gave him when I was thinking “Oh I want to open up a little French bookshop!” But I never do anything small. I fooled him and myself because I really thought this was going to be something where I could close up the shop at 3pm and go pick my kids up. But oh my gosh within two weeks of opening we had a cult following! I realized there were many other parents and families in New Orleans that were looking for French books as well. I’m a book nerd- when other kids wanted to be doctors, or dancers, I wanted to be a librarian growing up. Really I just wanted to sell books, not even sell books but provide books. In the beginning I was even thinking of making this a philanthropic endeavor; I just want children to read! What originally started as a small concept just blew up into an official retail business. My background is in commerce with a specialization in retail and marketing, and so I’ve brought in that expertise. The only city in the United States I could think of starting something like this in, would be New Orleans. My hope is that the shop becomes kind of a cornerstone for this French immersion generation that’s growing up in the city.

Even outside of the French immersion community, I feel this city is rooted in French culture, as well as other cultures of course. French heritage here is so strong, and it’s really exciting to be a part of this new Francophone movement in Louisiana.

How do you envision the future of French in Louisiana, now that you’re a part of the French immersion movement in New Orleans?

It is growing! The group that started all of this with CODOFIL really wanted to bring the French tradition back to New Orleans. And beyond that there is a trend, French is “trending” right now I should say! I travel to Montréal a lot, and I actually see French becoming so integrated within the New Orleans community, that it has just become a part of it. I guess some people would say it seems natural, but only one generation before me people were penalized for speaking French. To see French become a part of everyday life again is truly amazing.

My family and I spend summers in French towns, and to see my children interact and play with French kids that cannot speak a word of English just blows my mind! It’s just a part of who they are, and they’re proud of it. I can imagine that within 10 years this generation of francophone children will create a prominent bilingual community.

3- What are your impressions of the New Orleans francophone community, and why do you think they come to The French Library?

I am awe inspired by so many people within the francophone community in New Orleans. It’s so interesting because some are native French speakers, and yet other powerhouses within this same community do not speak French at all! I think two good examples are Pauline Dides (Principal of Ecole Bilingue de La Nouvelle-Orléans) and Keith Bartlett (Principal and CEO of Lycée Français de La Nouvelle-Orléans). My children originally went to Ecole Bilingue, and Pauline Dides is amazing to me, I honor her! I’m just awestruck at her commitment to the growth of this community. Currently my children go to Lycée Français, because I’ve become such a community activist within this movement and I wanted to actually commit to its growth on all sides. I’m so inspired by Keith Bartlett, who is not French but is so committed to the growth of French culture, education, curriculum, and creating a global and diverse environment for students. I’m mentored and supported by a lot of great people within the French community. 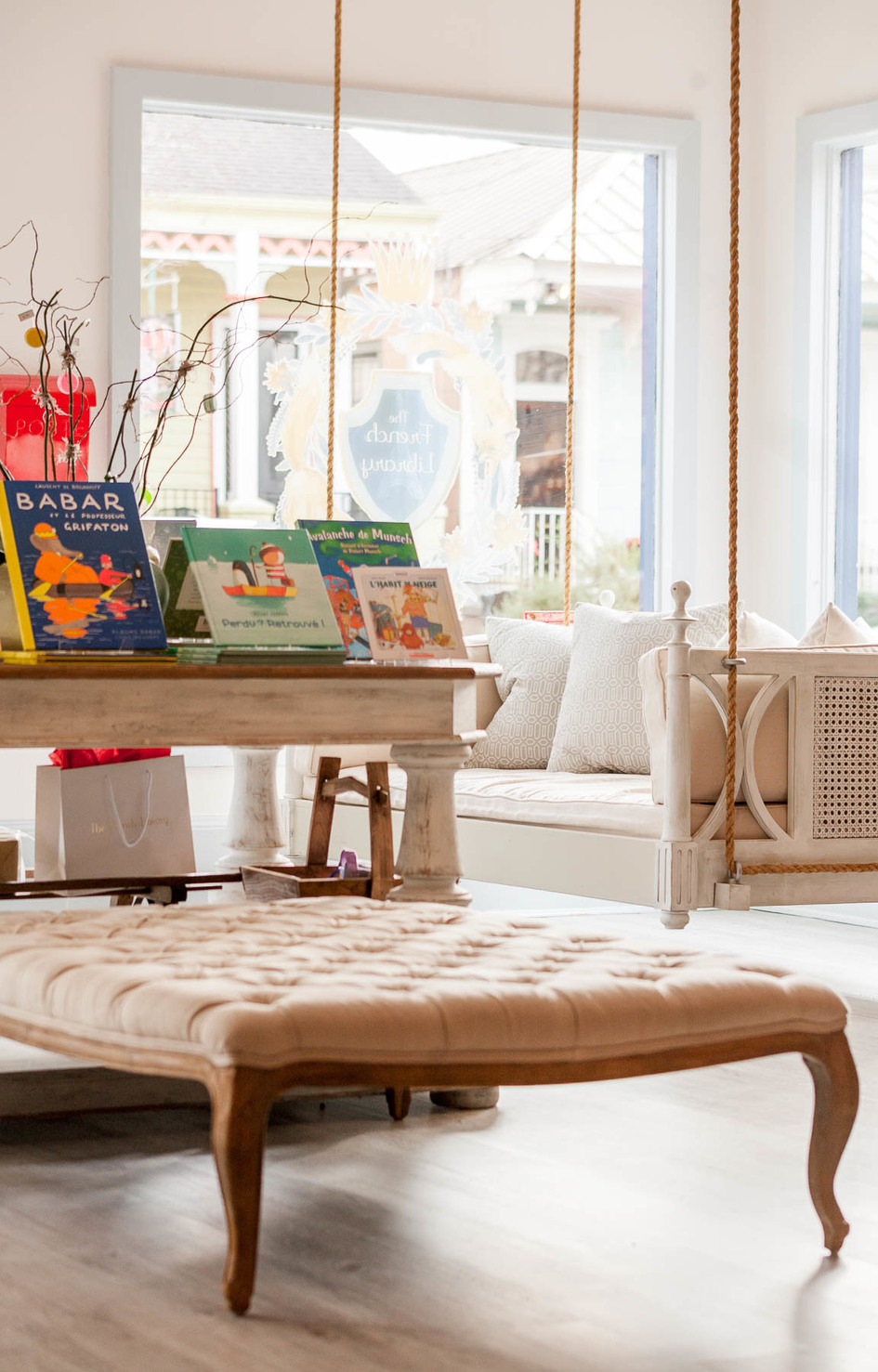 You know how parents will blend spinach into chocolate chip cookies so that children don’t know they’re eating vegetables? My number one goal is to create a love for reading through play and through creating an environment that kids and their parents want to be in. And before they know it, without the children even being aware, they’re reading and learning! I really feel supported by all of the schools and parents as I seek to extend education and exposure to French outside of school.

Bonus question- What are some of your favorite books in the library?

I am a moderate French speaker, so my store is actually perfect for me because I read at a children’s level, it takes a while for me to get through an adult novel in French! Right now I’m reading Harry Potter in French to my children and it does put them to sleep because I’m so slow. It’s hilarious because my children, who are 7 and 8, will take over for me. They are also currently reading Les Trois Brigands by Toni Ungerer, Oiseau et Croco by Alexis Deacon, and my three year old really enjoys La Tétine de Nina by Christine Naumann-Villemin, at bedtime. We are starting to sell books in English, and I’m also looking to get translations of some of my favorite English books that aren’t yet available in French. Currently I’m looking to get Streganona, one of my favorite books, translated into French because it’s currently not available. It’s so funny because in the beginning I just wanted to sell a few books, and now I’m working with publishers on translations and obtaining the rights to certain books. It’s really interesting how this business is evolving! 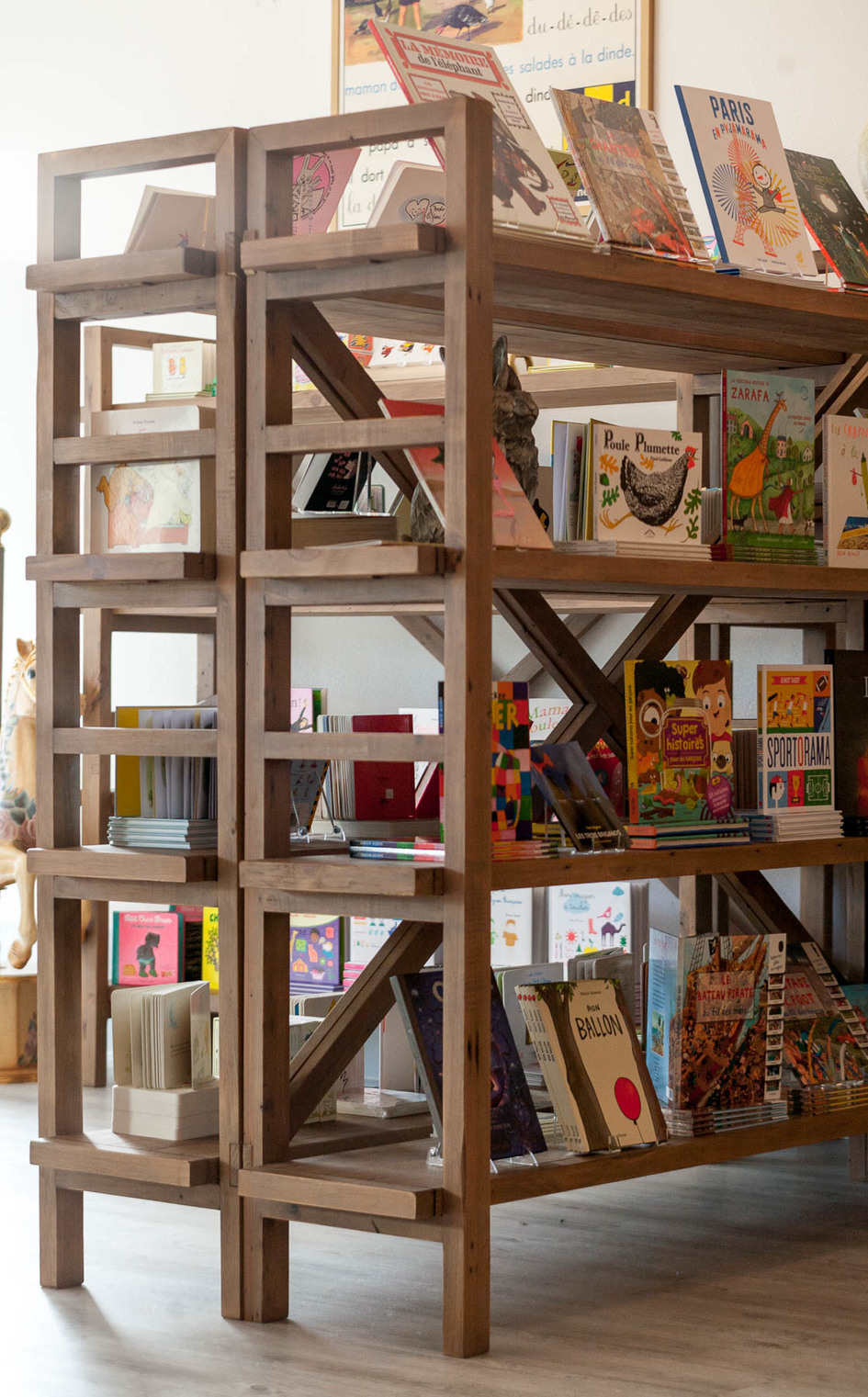