Francophonie exists in countless forms in the “most francophone state in the US”. We launched the “Trois Questions A” interview series to explore the rich diversity of this identity. 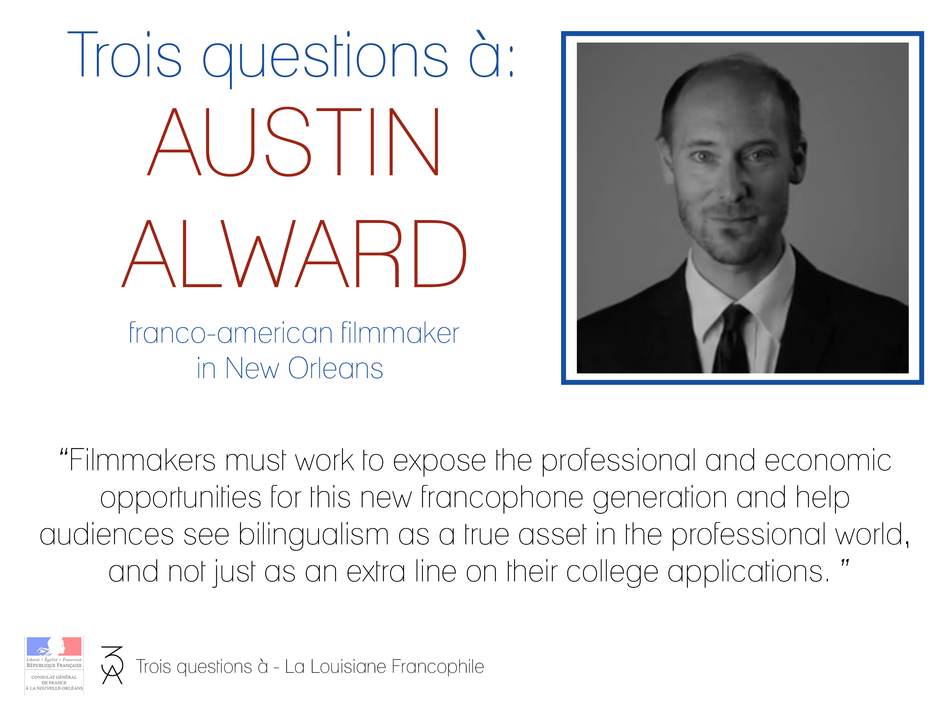 My name is Austin Alward, and I’ve lived in New Orleans, Louisiana since the end of July 2005. I bought a house one month before Katrina. I moved here from Los Angeles. I grew up in the Mid-West and my mother is French. I came to Louisiana for work, and to New Orleans in particular because it was closer to where I grew up and because it reminds me of my maternal French culture. I really felt at home here, and I’ve fallen in love with the city. I’ve been here for over 10 years working in the film industry (camera department). I’m franco-american, I have both passports.

For the past 9 years I’ve been with a French woman who is now my wife, we got married here in New Orleans. She also works in the film industry and feels very welcome and accepted as a French person in Louisiana and in New Orleans. We speak French at home, and we have a little girl so French is her first language. My wife and I decided that since the world outside is all in English, why not speak French at home? We enrolled her in a French school and, despite being only three years old, she seems completely bilingual. She doesn’t really to differentiate between the two languages— in her eyes they are simply two ways to talk about something or someone. It’s so interesting to see how she switches from one language to the other effortlessly!

We love the city, and work is going very well. But the fact that we have a choice of schools that offer a French curriculum with French teachers is the real reason for us to stay here. We discovered CODOFIL, and we’ve met quite a few teachers who have come to Louisiana. It’s truly an adventure to come here with CODOFIL. The teachers have no idea if they’ll end up in New Orleans or anywhere else in Louisiana! Most of them have never even been to the United States— I think it’s really brave of them! It’s also an important step for American parents, with no ties to French, to put their children in these schools. Apparently, there are five programs in New Orleans and they’re all full! So there’s a true demand, and I find that fascinating. Some families do have an ancestral tie to French. They tell us “Oh yes, my grandparents spoke French and I wish I could speak it but it’s too late. However, my children still have a chance!”

1- What is the importance of the French language in Louisiana?

First of all, I think there’s a historical importance because French culture has been a part of Louisiana’s identity since its inception. Today, largely thanks to CODOFIL, we have the impression that French is here to stay. I think Louisiana’s image is strongly linked to France and French culture. Looking towards the future, I think French will play an ever larger role in the State, especially in economic and cultural sectors.

That’s kind of my niche. In Hollywood, I’m just another American white guy trying to further his artistic pursuits. My short film “Le Grand Remix” really tries to find the links between French and American culture- which is what I live everyday! It’s interesting that there’s an audience for it. The project applies my personal experiences, where I bridge the two cultures every day, to cinema, where I tell the stories of francophones here in the United States and here in Louisiana. The experience of a young francophone person from Africa, France, Belgium, or Canada coming to Louisiana to teach little Americans is fascinating to me! 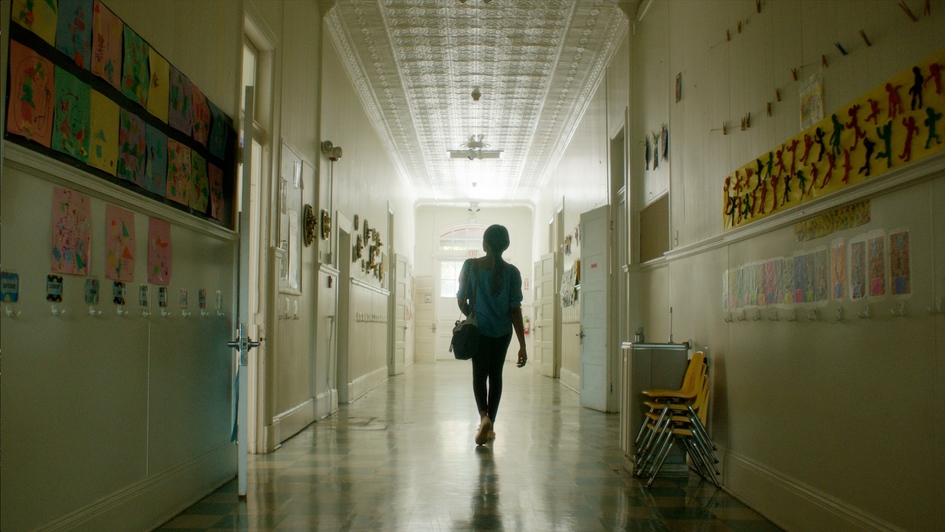 French plays a very important role in our family and we truly see a future for the language in Louisiana— much more so than where I grew up in Indiana. And, I would even say more than in California or New York, where the French population is much larger than here. Those regions don’t have the shared history, CODOFIL, or the same types of cultural exchange. I think we’re very well placed.

2- How do you think Louisiana French will evolve?

I see it evolving in a very interesting way and I would like to accompany this development. Film in Louisiana is almost exclusively dependent on subsidies. I would like to open the door to more coproductions with Canada, France, Belgium, North Africa, the Caribbean, and any other francophone region. In the United States, the Film industry is only private and only in Hollywood. The coproduction model doesn’t exist. However, since the subsidies are linked to the State (and thus the government), perhaps Louisiana coproductions would be possible. I want to push for this.

When I moved here people told me I wasn’t in the southern United States, but in the northern Caribbean. Martinique, Guadeloupe, etc. are all close by and we could create some very interesting storylines between the islands and New Orleans. I think there are many opportunities we are not yet aware of. In the audiovisual realm, there’s easily enough for me to make an entire career. It interests me more and more. So many people will benefit from this little project, this little exchange with TV5 Monde. With the immersion schools, we are in the process of recruiting new francophones. For centuries I think France has done a wonderful job exporting French culture and language, and people are drawn to it.

Paris symbolizes the apex of what human beings are capable of. Even though Americans like to make fun of the French, they still love Paris. And of course francophonie and French culture is a thousand times larger than Paris! There’s a true cultural strength that France can continue to exploit. I think it would be a real shame, a real mistake if they reduced the budget for French schools abroad. People attend these schools because they feel motivated by this culture that isn’t theirs. So for me that’s the ideal evolution, and we must take advantage of this opportunity.

Since I’ve been in New Orleans, the Consulate has become smaller and smaller. I think we absolutely must not lose it! In fact, we should be finding a way to make it even larger, and see it as an investment in the future of French language and culture. For me, that would be the dream.

3- How do artistic projects emphasize the value of Louisiana’s francophonie?

My wife and I could never have dreamed of such a perfect situation, especially with the grants we received to support young Louisiana filmmakers. These organizations formed a partnership with TV5 Monde to create a short film on French culture in Louisiana. I wrote a scenario based on the lives of French people who I know in Louisiana; a family that speaks French at home, that put their child in a school where the teachers speak French and come from francophone countries. I think it’s very brave of American parents to choose to put their children in a French school when they know they personally won’t be able to understand the teachers or the homework. When we attend the parent-teacher conferences, the vast majority of these teachers do not speak English all that well. Often, at the beginning of the year during the welcome meeting, you have the super stressed teacher nervous about speaking in English with a strong accent in front of a group of parents who don’t understand a thing. Here you have a true melting pot! The parents are there because they want to be there. They made the choice. Then the children themselves have to integrate and learn this new language. For my film “Le Grand Remix”, I chose three of these stories: the parents who chose to give this opportunity to their children, the children themselves that are going to experience the immersion classroom every day, and the teachers that come from afar.

In my scenario, the two main characters are a teacher from a francophone country in Africa and a student who has to leave her school, which she loves, because she is too old (the program stops after 8th grade). It’s a work of fiction, but not too far from reality. I added certain dramatic elements to increase the intrigue. The teacher’s little sister is going to get married in her home country, but if she leaves the United States, she may not be able to return due to immigration issues. She wanted to come to Louisiana, to discover this country, this music, this culture, and she fell in love with the city. She has to choose between staying in the US to continue her adventure in a culture she feels drawn to, or to take the risk to go to her sister’s wedding. 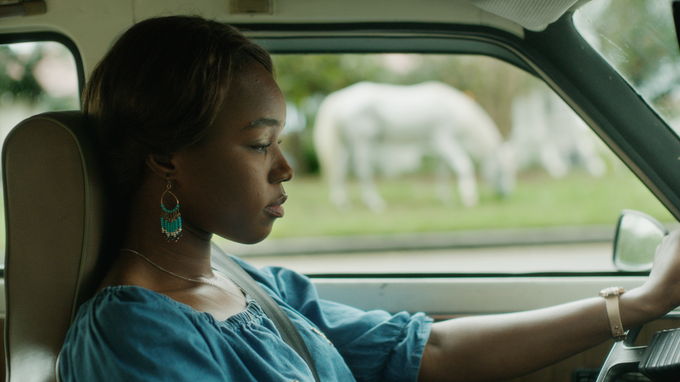 The other character is a fifteen year old student who is trying to hold on to the connections she made at her French school. She is Vietnamese. Her grandmother spoke French and looked after the grandchildren in New Orleans so they could attend one of the French immersion schools. There’s a moment in the film where the grandmother says “when I was a little girl in Vietnam, if you could go to a French school, you went to a French school.” Now that the grandmother is deceased, the student and her little brother have to move to live with family elsewhere. The student thinks that if she leaves New Orleans, she’ll lose her connection with French. She’s trying to find a way to keep French in her life, while the teacher is trying to keep American culture in hers. That’s the story, all in a quarter-hour! The film really plays on the idea of mixing French and American culture. It’s a love story between the each character and the culture of the other. 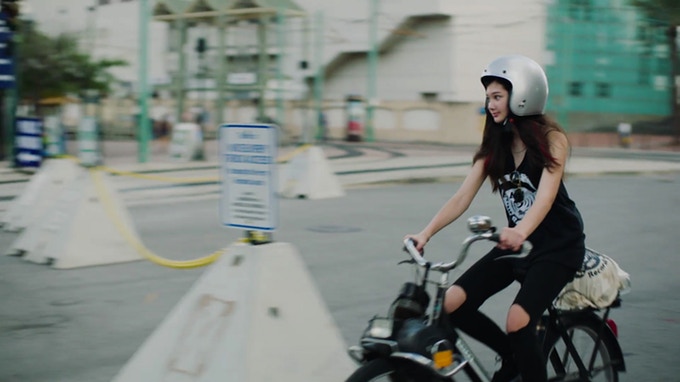 I think this is the perfect opportunity to make this film. There are no actors, it’s more or less their real-life. The person who plays the teacher works at my daughter’s school. She’s from Senegal, and she had to learn to play her character for a work of fiction. It was fantastic, she even learned to ride a horse! The other person is an ex-student from this same school. She really misses French, and wants to move to France. In the film, her character is a DJ that idolizes Daft Punk. So she had to learn to DJ for her role. In the end, everyone learns a lot, but for the actors in the film, this is their real life.

There are so many young people in New Orleans from all around the world that are here in Louisiana because of the French language. There is hope! Filmmakers must work to expose the professional and economic opportunities for this new francophone generation and help audiences to see bilingualism as a true asset in the professional world, and not just an extra line on their college applications. We need to find more examples! The oil and gas, film, music, hospitality, and tourism industries in Louisiana can all benefit from an increasingly bilingual population, which makes the state more marketable. I think there’s still a lot of work to be done. I hope that they will see that it will create more professional opportunities for these children. I think there is a true future for francophonie and the French language in the United States, especially in Louisiana!