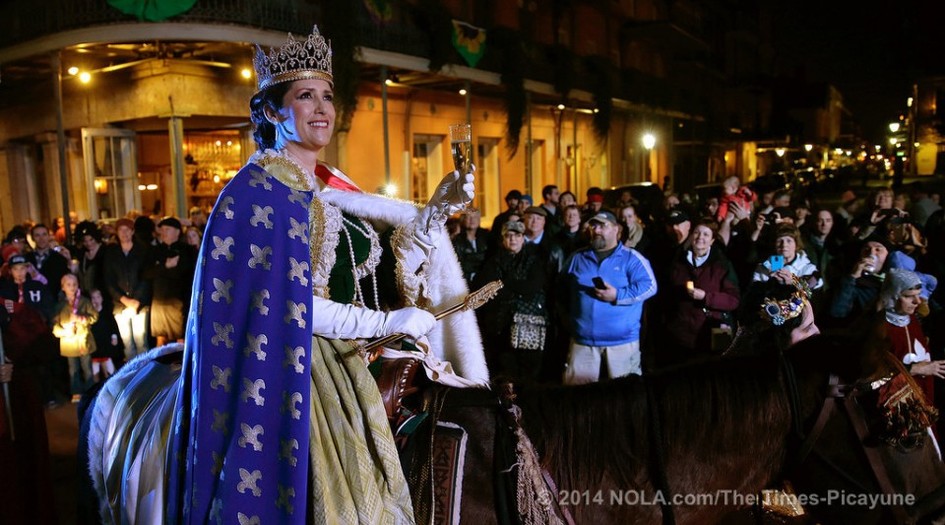 The eighth annual parade includes approximately 300 participants of all ages, representing various stages of Joan of Arc’s life. The parade celebrates New Orleans’ French heritage, commemorates the wonderfully coincidental nature of “The Maid of Orléans” birthday on Twelfth Night, and serves to acknowledge and honor the golden Joan of Arc statue in the French Quarter.

The 2016 parade begins an hour later than in past years, at 7:00 p.m., to accommodate the growing number of parade participants, new props, and more musicians and walking groups. The parade members and volunteers gather at the Steamboat Natchez landing at approximately 5:00 p.m., then begin to line up on Toulouse Street at approximately 6:30 p.m. to roll at 7:00 p.m.

The route is the same as the 2015 route: Beginning Toulouse and Decatur Streets, turning left towards the Bienville statue at Conti, to take a right at Conti Street. One block up Conti, the parade turns right onto Chartres, to pause there for the annual Jeanne d’Arc Royalty Toast, coordinated and hosted by the Historic New Orleans’ Collection Williams Research Center, with remarks by HNOC director Priscilla Lawrence and the Consul General of France in New Orleans, Gregor Trumel.

“We are very proud to be take part in the great Joan of Arc Project, and to open the Mardi Gras season by celebrating our adored Maid of Orleans! Joan was a hero. She embodies resistance, resilience, and strength in adversity more than ever. France and New Orleans share a reason to celebrate this strong young woman: No Joan, No Orleans; No Orleans, No New Orleans!”

The parade then continues to St. Louis Cathedral on Jackson Square, for the Blessing of Joan’s Sword by The Very Reverend Father Phillip Landry. After the blessed sword is given by the 2015 Maid Emma Martello to the 2016 Maid Margaux Schexnider, the parade continues down Chartres to Ursulines, to turn right just after the Ursulines Convent, onto Decatur. The parade will pass the Joan of Arc statue at St. Phillip and Decatur Streets, then continue to the parade’s ending point at Washington Artillery Park, across from Jackson Square, for the king cake ceremony, where the Maid of Honor crowns this year’s King, Eric Belin, President of the French American Chamber of Commerce, and her “birthday cake” (king cake) is shared among the 2016 Royalty, with welcoming remarks and congratulations offered by Queen Yolande of Aragon, portrayed by Sandra Dartus, Partnership Liaison, FestiGals, Inc.

As always, the Krewe de Jeanne d’Arc encourages the public to bring king cake to share for Twelfth Night and Joan of Arc’s birthday.

Several large scale puppets and props will accompany the batallions, representing Joan’s Voices (Saint Margaret, Saint Catherine, Saint Michael); The Gates of Orléans, France, where Joan led the army to lift the Siege of Orléans, resulting in her moniker The Maid of Orléans; and a new 12 foot bell tower, hand-pulled twelve-foot tall bell tower with swinging bells, to represent the bells ringing when Joan’s name was restored.

One of this year’s signature new throws will be Twelfth Night rings with a proclamation requiring the wearer to “engage in the eating of King Cake, the imagining of costumes, the devising of satire, and the mastery of revels”. Representing Joan’s early life as a shepherdess and leader of the herd, there will be 6 “full-size” wooden sheep pulled on wheels by shepherds as part of the new Domrémy battalion, representing Joan of Arc’s hometown and childhood. The sheep will carry one of our new Krewe throws: mini sheep pillows filled with recycled bubble wrap.

Musical elements will include percussive songs created and performed just for the Joan of Arc Parade by Skinez and Bonez, a female bone gang who dress as Joan’s judges in the Trial battalion, playing haunting rhythms and chants; Kilts of Many Colours Bagpipes and Drums representing the Scottish soldiers and pipers who led Joan into Orléans, France, in 1429; and other local musicians playing medieval music with a mix of trumpets, tubas, and other instruments true to Joan’s time.

Also included in the new Domrémy battalion will be French students and families from several local schools, including Lycée Francaise, Ecole Bilingue, and McGehee School, representing Domrémy villagers, and friends and family of Joan of Arc.

“We are very excited to be part of a parade that promotes the French heritage in New Orleans. Since Lycée Français is the free French immersion school serving ALL of Louisiana it is very important for us to be involved with all things French! We are looking forward to the partnership in both parading and education."

For the second year in a row, the Amazons Benevolent Society will wear golden breastplates in the parade, honoring their current cancer survivor members as well as those who have lost their battle to cancer.

“The Amazons walk with the Joan of Arc Parade because Joan of Arc is a true Amazon…she is what we stand for with her strength and courage. And, as a historian and seventh generation New Orleanian, I so adore the historical aspect of this parade!”

The parade lasts approximately 90 minutes from start to finish. For a full gallery of 2015 photos and parade history, as well information on other projects and events coordinated year-round by the Joan of Arc Project, visit www.joanofarcparade.org.

Nola.com Article Our Best Photos from 2015 French is Alive and Well at Joan of Arc Parade