Terri Ricks, mother of two children in immersion programs and Deputy Secretary at the Department of Children and Family Services

Francophonie takes on an infinite number of forms within the "most francophone State in the US". We’ve launched the "Three Questions" series to explore the diversity and vitality of Francophone culture in Louisiana. Each month, we’re interviewing a Louisianian who constitutes a piece of the State’s francophone identity. For our second installment, we spoke with Terri Ricks at the Department of Children and Family Services, who has two children in language immersion programs. 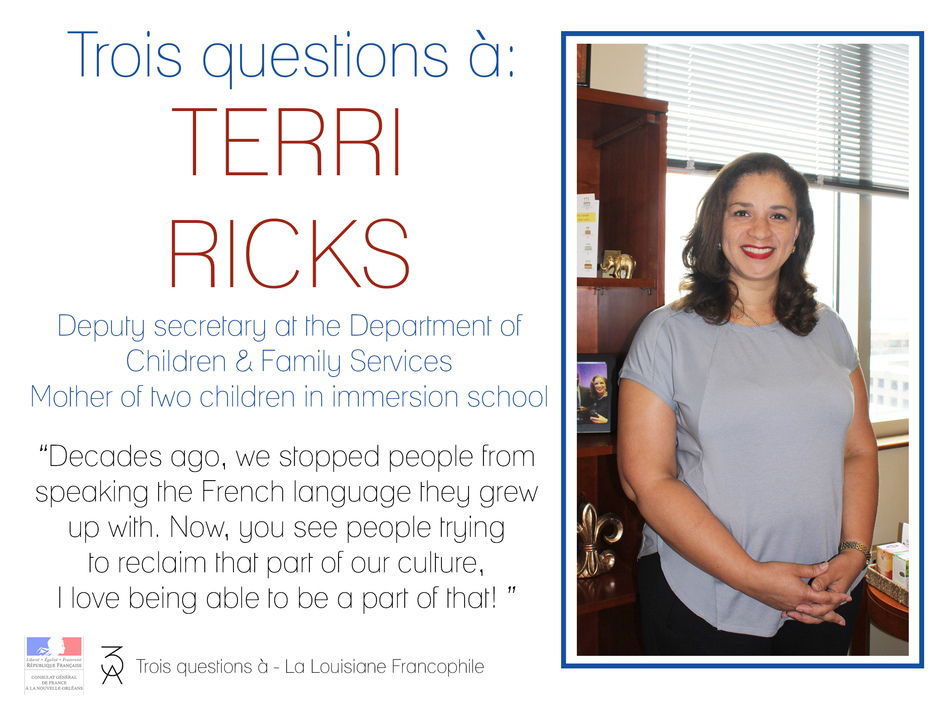 My name is Terri Ricks, and I am currently the deputy secretary of the Department of Children and Family Services in Louisiana. I have two children, Ava is twelve and is currently in French language immersion school at Westdale Middle School in Baton Rouge. She started off at Baton Rouge International School, immersed in both French and Spanish, and then in second grade she went to Baton Rouge Foreign Language Academic Immersion Magnate School, which we call FLAIM. She completed second through fifth grade there and now she’s at Westdale in seventh grade. My son CJ is eleven and had the same trajectory through those three schools, initially immersed in both French and Spanish, but he chose the Spanish immersion track.

Why did you and your spouse decide to put your children in immersion schools, when neither of you speak French or Spanish?

Right! So I think I would have to call it a little bit of divine intervention. Years before my kids went to school, a friend of mine told me about her children learning other languages, and how good it was for the brain and their development. I filed that piece of information away, and then I found out that Ava, my first child, was not going to be able to start pre-K with her peers because of her late birthday. They were going to put her through preschool again to learn the things she already knew. So I thought, well why couldn’t she just learn it again in a different language? That was the mechanism that got us into the program, but if I were to go back and change my own education experience, the one thing I would have loved to have done is learn a second language.

I do have some French blood running through my veins. I have a recollection of my mother listening to my grandmother speak our broken French when I was very little, she said she couldn’t speak it but she could understand it. This brought a sort of nostalgic element to the decision. And my daughter just really, really loves languages, and the French language especially!

Why is it important for them to be speaking French in Louisiana specifically?

Well I have to say that my reasons for that have grown over time, especially recently. My understanding of what being educated in multiple languages does to your learning ability, to your brain and its development has really grown. The global economy is very important to me as well and the ability to speak languages in different parts of the world. I travelled when I was younger to France and Spain, but I had no way of connecting to the people there! I wanted something different for my children because it was available. Also, I’ve learned more about our Louisiana roots. Decades ago, we stopped people from speaking the French language they grew up with. Now, you see people trying to reclaim that part of our culture, I love being able to be a part of that! I love the fact that learning other languages makes the world smaller for the kids.

But the biggest thing I think now is the true connection that you can make with another person. It’s hard to truly have a heart connection with somebody if you speak different languages. My family and I help lead a church in Baton Rouge, which has a sister church in Haiti. This September for the first time, the church leaders from Haiti came to Louisiana. We set up some time for our family to go to dinner with them, and we relied on our daughter to bridge the language division between us. We had a great dinner, and I was blown away to see her directly connecting with them, and then helping us figure out how to connect. It helped me see even more how being bilingual or even trilingual can make the world a much more friendly place, and how we can be on the same page as people. Language is the first way to do that.

How do you interpret your daughter’s growing sense of belonging to the global francophone community now that she has a second language?

Well, one of the best things about the language immersion schools in Louisiana is that by virtue of the fact that we are a language immersion school, when some of our new Louisianians come from France or Spain or wherever, they end up coming to our school. Ava has friends from France, Martinique, and Haiti, which automatically brings awareness to different francophone countries. Her sphere of influence has reached around the world, and that’s just one thing!

Each of the three schools has done a really incredible job of bringing culture in through language and art. The students aren’t just studying the language, but also the cultures of the different countries that speak the language. Ava may or may not realize how important it is for her to be learning about different places this way, to be able to sing the songs that the children there sing, to read the books that a child her age would be reading there, it’s incredible. I do think she also has a whole lot of fun being able to communicate with people that I cannot, and she really likes laughing at us trying to speak the language! My children love being able to say "that is just not how you say that Mom." So they have a little bit of an edge on us that way.

Bonus- Do you have any advice for parents considering enrolling their children in immersion school?

My advice is to do it! I have yet to find a downside. On the list of pros and cons, I have not been able to find a reason as to why someone wouldn’t put their child in language immersion. I do think that some parents are leery as to whether or not their kids will keep up, or if they will still be able to keep up with things in English since all the testing is done in English. But all the schools have compensated for that somehow. The schools with immersion programs are actually academically superior to those without immersion programs, so I never felt like I was choosing language over something else. I felt like I was choosing the more rigorous academic route plus the language. Since they don’t speak the language at home my husband and I were thinking "do they really know the language?", and then we would go to open house and see them exchanging with their teachers and think "well I guess they really do know the language!" Their proficiency, the fact that they really can do it, the fact that the program works so well and we weren’t having to supplement with anything else was surprising to us. It’s really cool and I love telling people "Oh yeah, my kids they learn in French. Oh yeah, he learns in Spanish. Yes, they’re fluent!"