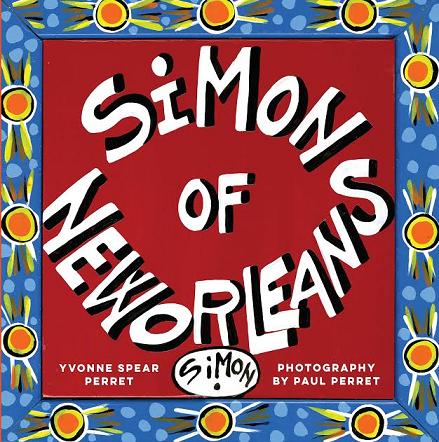 Simon of New Orleans Written by Yvonne Perret with Forward by Gregor Trumel, Consul General of France in Louisiana

Simon of New Orleans is a celebration of the exuberant, sumptuous, energetic work of French artist, Simon Hardeveld, synonymous with his adopted hometown. It is difficult to wander around New Orleans without stumbling across the explosions of color and whimsy that are the trademarks of a Simon piece. In fact, the scope of his work is unparalleled.

Private collectors snap up pieces as soon as the paint is dry ; he painted an entire news set for New Orleans ABC affiliate ; and one cannot travel throughout the City of New Orleans without seeing Simon’s artwork everywhere. Though always New Orleans-centric in nature, Simon’s work is increasingly finding its way to national and international venues.

Simon has endeared himself to locals and tourists alike, and they have responded to the unpretentious wit that is the hallmark of his art.

According to Gregor Trumel, Consul General of France in Louisiana, Simon’s works are an “invitation to joy” and “an antidote against the poison of pessimism and introversion.” Those who know his work might also add that Simon has captured – in bright colors – the soul and spirit of the city.

With roots deep in the Cajun and “y’at” cultures, Yvonne Spear Perret has been writing about the unique culture of New Orleans for over thirty years through features published in the Times-Picayune, New Orleans Magazine, Gambit, USA Today, and the Christian Science Monitor.

Perret is a graduate of Tulane University and a former high school teacher and principal at Isidore Newman School. She has raised three children and resides in the New Orleans suburb of Metairie.

River Road Press LLC was founded in 2014 in New Orleans, Louisiana with a focus on children’s books, history, Southern culture and food. River Road Press is a boutique publisher, committed to publishing the highest quality books, and encourages collaboration and artistic partnership with its authors, illustrators, photographers, and artists.

Rio Grande Valley ABC, The Little Float That Could, USS Alabama : Hooray for the Mighty A !, Ten Gators in the Bed, Bugs on the Rug, Gumbo Ya Ya, and Strange True Stories of Louisiana were its debut titles in 2015. River Road Press 2016 Fall releases include Simon of New Orleans and a debut children’s book, Fred the New Orleans Drummer Boy, by Cowboy Mouth drummer and lead singer, Fred LeBlanc.