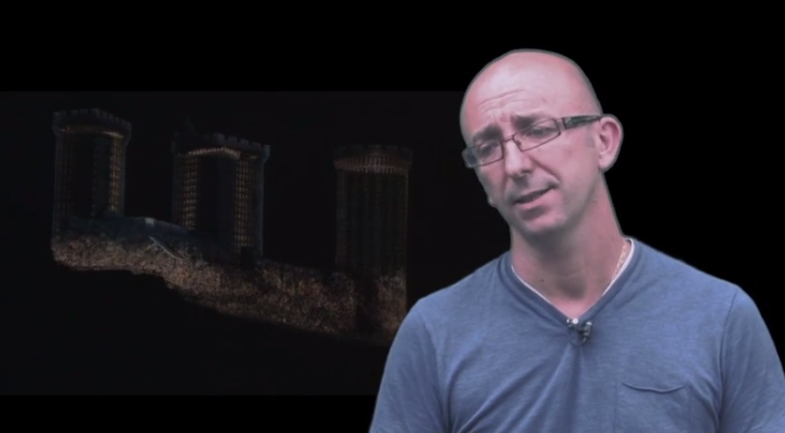 From November 30 to December 6, 2014, the Arts Council of New Orleans organized, for the first time in Louisiana, the celebration Luna Fête (Light Up Nola Arts). For six nights in a row, the old Mayor’s office of New Orleans, Gallier Hall, was transformed into a magnificent video mapping projection of monumental proportions.

Sebastien Salvagnac, the artist behind Luna Fête, says that the idea to bring video mapping to New Orleans was born in 2013 when Kim Cook, director of the Arts Council, visited the Festival of Lights in Lyon, France. “We talked for a long time, despite my English,” says Salvagnac of his first meeting with Cook. “It’s complicated. But since she speaks a little French and I speak a little English, we discussed quite a bit.”

Then, six months later, Ms. Cook invited him to New Orleans. It was a trip meant to “try and capture the emotions, the feelings, the vibrations of the city”. For ten days in June, Béatrice Germaine, Artistic Attaché at the Consulate General of France in Louisiana, led Mr. Salvagnac as he discovered New Orleans.

“It allowed me to follow pretty quickly how the city functions before its historical and architectural elements, which are so important…I came back to France with an enormous amount of cultural and social information,” he explained.

One month later, a first storyline and musical markup were sent to the Arts Council.

As for the music, people have been surprised to learn the name of the musician. “They are all convinced that it has to be someone from New Orleans who did the music…It’s my brother!” He was able to take only what seemed to him as “essential, true, and sincere about New Orleans”.

A Story in Eight Minutes

To create a summary of the city’s history in eight minutes is not easy. The most important thing was to touch the hearts of as many people as possible. “There is something that touched me – the way of life, the people of New Orleans,” says the artist, “I wouldn’t say that the people are resigned. But Katrina changed this city forever…There is something truly festive here. That’s what touched me. That was really what touched me more than even the French culture that is obviously very present.”

So, how did he write the story? “For me, the trees here are absolutely extraordinary. Beatrice showed me this tree of life in Audubon Park. It is magic. I saw this tree, I saw these images that were with it, and I followed that lead.”

La Maison Production, based in Toulouse, is already known in Moscow, Jerusalem, Dubai, and Lyon, amongst many others, where each city has its own theme. “People recognize themselves in the images,” says Mr. Salvagnac. However, he expresses that “the energy in New Orleans – I haven’t found it anywhere else. It is extraordinary. There is a joy of living, of well-being…A need to live, eat, drink.”

Despite numerous technical obstacles that exist when seeking a space for video mapping projections, the Arts Council envisions an even bigger festival in the future, with more international artists.

Mr. Salvagnac says that he looks forward to returning for a second edition, and that there are all kinds of interesting and new events planned for next year.

For more information, you can also visit the article on our website