I address to you, along with the whole team at the Consulate General of France in Louisiana, my sincerest wishes for your health, success and happiness for the New Year!

Last year, 2015, was intense for French diplomacy, and concluded with the success of the COP21, where a universal agreement for the fight against global warming was achieved. The Consulate General, immersion schools, universities and our partners each took part in this success, alongside the numerous state representatives who traveled to Paris in early December to proudly make heard the voice of Louisiana.

2015 was a crucial year for the long and beautiful relationship between France and Louisiana: strengthening of academic cooperation with the French Antilles in the heart of the Creole world; continued success of bilingualism and immersion in schools; support of French culture, business and our fellow citizens.

At the Consulate General of France, we are not limited to New Orleans. This year, we have found ourselves in Baton Rouge, Lafayette, Lake Charles, Thibodeaux, Arnaudville, Alexandria, Houma, Shreveport, Ruston, Monroe, Natchitoches, Grand Isle… Throughout the state, we have received the warmest of welcomes and, everywhere, we have had the pleasure of speaking French. Louisiana French, the French of France, Acadian French, Créole, Houma. French in its rich diversity!

Louisiana is more than ever the francophone “hub” of the United States. French is not a foreign language in Louisiana, but, to the contrary, it is written in its culture, its heritage and its identity. With more than three billion dollars in commercial trade and 13,000 jobs, French and France are an asset for the state.

In 2016, with your help, we will continue our efforts to strengthen ties and anchor Louisiana even more in the French-speaking world (500 million French speakers across the globe in 2050; French is the most studied language worldwide after English).

France will, in particular, return in force to the Festival International de Louisiane in Lafayette (the most important francophone festival in the United States, popular and free). We will prepare, with Mayor Landrieu and his team, festivities in honor of the Tricentennial of New Orleans in 2017-2018. New Orleans is not only a French city, of course, but we have a special role to play. We know that you have great expectations of France, and we take pride in that.

The historic, cultural, economic and, I would even say, moving ties between France and Louisiana are exceptional. Together, we are continuing to grow these ties, for our future and our collective prosperity, and for the benefit of the Franco-American friendship. The despicable attacks of January and November 2015 in Paris showed the extent to which our values and common ideals are shared. I take this opportunity to thank you for your hundreds of messages (letters, flowers, candles, drawings…) of support to Paris and to France. We will never forget this surge of friendship, so important under these tragic circumstances.

Finally, my thoughts turn toward my dear fellow countrymen in France and Louisiana. You are coming to this state in greater and greater numbers to teach, work, and live. You are dynamic and optimistic. Our community is united. It will be my pleasure to meet and work with you, throughout the year ahead, across all four corners of the state. We will continue to facilitate your consular needs and to assist you to the best of our abilities.

We look forward to many exciting projects in 2016 for both France and Louisiana. Once more, we wish you and your families a very happy New Year! Vive la Louisiane, vive la République, et vive la France ! 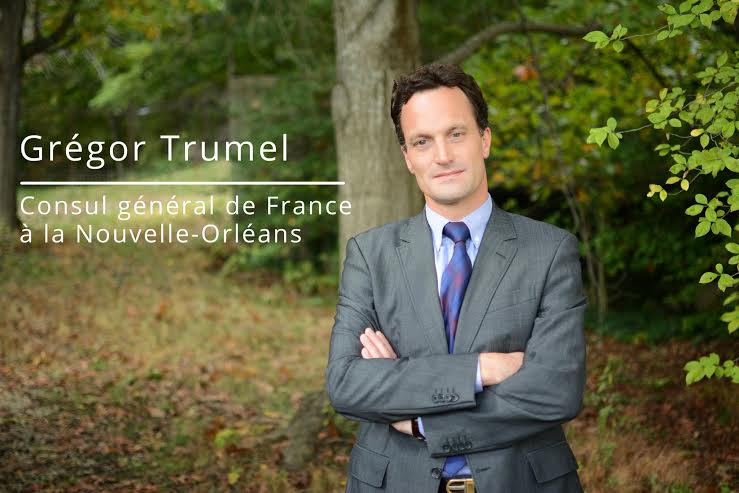