On January 6, 2014, the Krewe de Jeanne d’Arc celebrates its seventh annual walking parade in the French Quarter. The parade marks the 603rd year since the birth of the French patriot in 1412 in Domremy, France.

The medieval-themed procession echoes the spring festivities in Orléans, France that are now in their 585th year.

Amy Kirk, Director of Marketing for the French Market Corporation and Krewe Captain, references the parade’s ties not only to France, but also to Louisianan history and tradition. “It’s about family, history, and celebrating our city and its uniqueness,” says Ms. Kirk. The parade, which marks the official start to the carnival season, has a strong community focus. As a grassroots walking parade, it recalls old French tradition and the original marches of Mardi Gras.

Consul General of France in New Orleans, Grégor Trumel, will toast the honorary royalty and Joan of Arc from the balcony of the Historic New Orleans Collection’s William Research Center at 400 Chartres Street, the first stop on the parade route.

Consul General Trumel’s toast at the parade is especially appropriate because the Joan of Arc statue, a gift from the French in 1958, represents something unique to the community. “It means something to people personally,” says Ms. Kirk, “People have really strong feelings about it because it’s essentially a French parade—we are after all the Krewe de Jeanne d’Arc! ”

In addition to the toast, many of the throws, banners, and collectibles given at the parade are in French and English. Also, as tradition dictates, the person chosen to represent King Charles VII must have clear French ancestral roots. This year that honor goes to Patrick Van Hoorebeek.

The young Joan of Arc on horseback leading the procession, known as the Maid of Honor, is selected through a meticulous competition amongst the local high schools. Applicants hoping to represent Joan must complete essays on triumph and defeat, Joan’s importance to our city, and demonstrate strong French language skills.

Most importantly, she should demonstrate “a unique sense of self” and a “really strong sense of goodness that is apparent in the interview process…there is always one with a notable balance of humility and confidence that stands out”, says Ms. Kirk. This year’s Maid of Honor, Emma Martello of McGehee School, symbolizes Joan’s youth and promise.

The medieval-themed procession of approximately 200 celebrants includes many handmade and hand-embellished throws, including painted wooden swords, pendants, collectible playing cards, krewe-made Saint Joan medallions, handmade Joan dolls, and battery tea light candles that are placed on an oversized birthday cake for Joan of Arc at the end of the parade route.

Weaving together a long history and a hopeful future, Amy Kirk says that French is “alive and well on that night”.

The parade begins at the corner of Toulouse and Decatur streets at 6pm on Tuesday, Jan. 6. For more information, visit the Krewe of Joan of Arc and our event page! 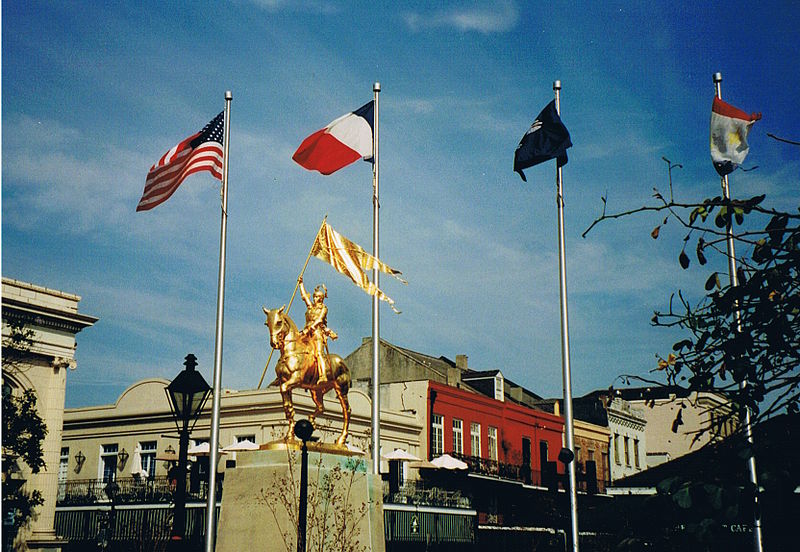