On the occasion of the New Orleans Tricentennial, La Résolue signed up to participate in New Orleans Navy Week 2018 along with other vessels from the U.S Navy, the U.S. Coast Guard, Great Britain, and Canada. 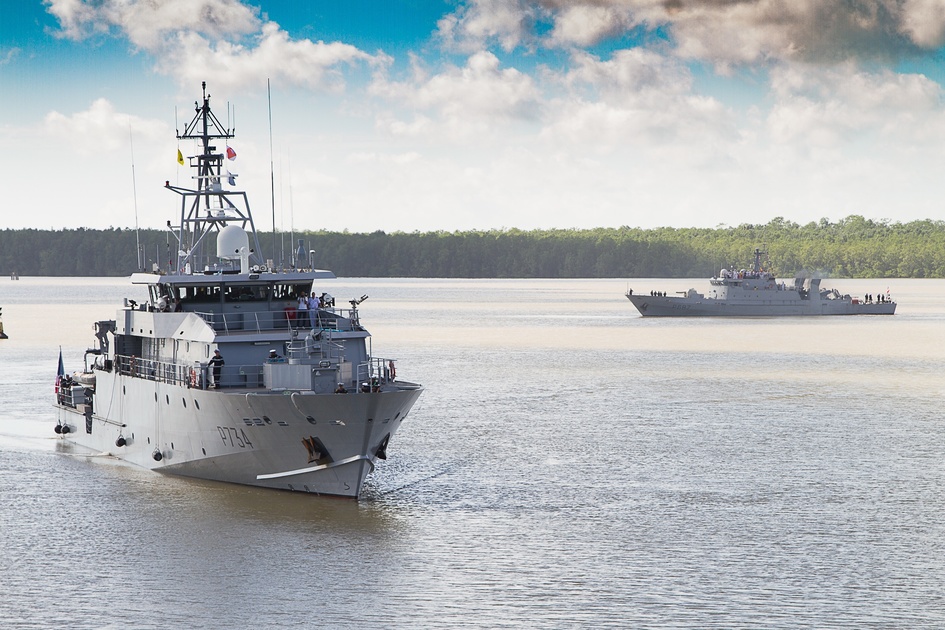 She will berth on the Thalia Street Wharf on Thursday, April 19 2018 in downtown New Orleans with a crew of 25 sailors, including 5 Officers, 17 Petty Officers, and 3 quartermasters and seamen. LV Antoine de Rodellec, is Commanding Officer of FS La Résolue.

FS La Résolue entered active service in 2017 as the second of a short series of three ships that were especially designed to operate in French Guyana, a strategic territory for France and Europe as it is their only space port.

The ship’s primary mission is the surveillance and protection of the space center during launches. She is also utilized at the maritime frontiers to monitor and intervene against illegal fishing activities. She can be deployed further in Caribbean in drug enforcement operations, along with the frigates already stationed there.

FS La Résolue is a 60 meter (169.85 feet) patrol boat with a low draft that allows for navigation in the coastal shoal waters of French Guyana. She is fitted with a davit and launching ramp that can accommodate heavy rhibs able to carry a boarding team of six people.

She has a fire-fighting water cannon, used as a non-lethal weapon, on her forward port side, a 20mm remotely operated gun on the bow, and a .5 inch caliber gun on each side.

After completing his studies in tropical agronomy and fisheries, he started working in Madagascar on the management on fisheries. Later he returned to France and began work as a fisherman. In 2005 he joined the French Naval Academy.

After spending a year on FS Ventôse in the French Caribbean as a volunteer with the navy, he was commissioned on FS L’Audacieuse in 2008 as Operations Officer and the Executive Officer. In 2010 he was commissioned on the Frigate Guepratte as Officer of Information Systems. He was Principal Warfare Officer in Libya and during counter-piracy operations in the horn of Africa.

After completing the Principal Warfare Officer courses in France, he was assigned to the anti-submarine warfare destroyer Latouche Treville in Brest, on which he took part in numerous NATO exercises. He was then commissioned for one year of FS Nivôse in Reunion Island as Operations Officer, where he conducted a mission in the French Antarctic territories and an operation inside CTF150.

He was then appointed to Commanding Officer of FS La Résolue, which was under construction at the time. He joined the crew in December 2016 after spending six months at the French Guyana operational headquarters.