On Tuesday, July 3, Mr. Xavier Darcos, President of the French Institute, the operator of the cultural action of France abroad, and Mr. Eric de Rothschild, President of the Shoah Memorial, a Paris-based resource center dedicated to the history of the Holocaust, signed an agreement at the French Ministry of Foreign Affairs in the presence of the Ambassador for human rights and the international dimension of the Holocaust, Mr. François Zimeray. 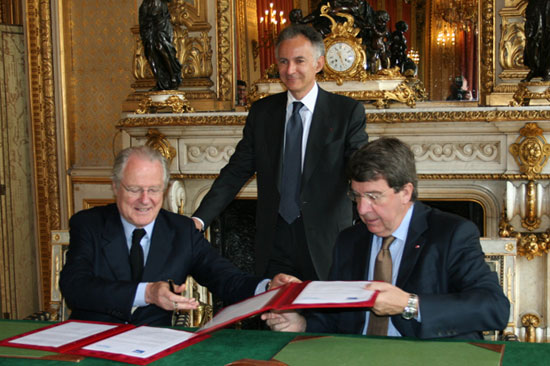 The agreement plans the circulation of exhibitions organized by the Memorial taking place throughout the French scientific and cultural cooperation network abroad, as well as the digital distribution of its works. The two institutions also organize conferences and debates in order to raise awareness among the new generations in France and abroad of the duty and actions of remembrance. Finally, this partnership will enable literature on the theme of the Holocaust to be translated and published throughout the world.

The first event resulting from this new partnership is the “Allons en France” programme, which begins this month. The Ministry of Foreign Affairs and the French Institute has invited 120 young people from around the world to attend a series of meetings and tours on the theme of human rights. The Shoah Memorial will receive the participants for a conference followed by a discussion on this dark time in our history in order to bring them face to face with remembrance issues.