Louisiana and France have a deep and mutually beneficial relationship. French companies have created 7,600 jobs in the state, the second highest for foreign companies in Louisiana.

"Given the dynamic economic relationship between France and Louisiana and the vibrancy of French language and culture in this part of the United States, we are convinced that there are many opportunities to bring professional French to the next level. The tourism, service, industrial sectors all benefit from French-speaking workers, and that is a dimension this Consulate works hard on. For this reason, next year we are organizing the first French Language Job Fair in New Orleans. We are very optimistic about the growing role of the French-speaking community in the economic development of Louisiana" 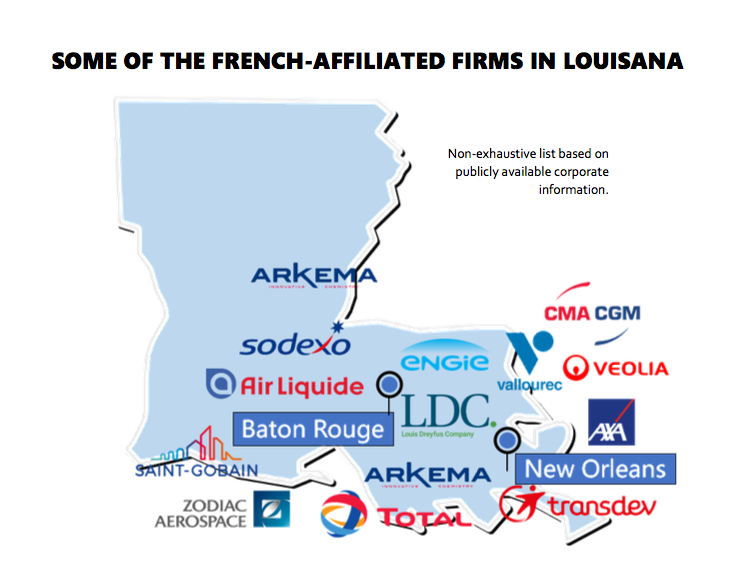 Transdev: A success story in Louisiana

Transdev is one of the world’s leaders in mobility. It advises and supports local authorities and companies from preliminary planning and contracting to daily operation of public transportation systems. With 82,000 employees in 20 countries, Transdev transports 10 million people a day, operating 43,000 vehicles and 13 modes of transportation.

In 2012, President Barack Obama tapped the VP of Transdev in New Orleans as one of 11 national leaders as a Champion of Change honoree for creating jobs in their communities and using innovative techniques to develop valuable projects to help improve America’s infrastructure, for envisioning and creating the Loyola Avenue streetcar expansion.

The expansion opened in 2013. The $45M investment revitalized a previously dark corridor in the Central Business District and spurred $2.7-Bn Dollars in new development along the line.

French Economic Footprint in the U.S.

There are $268 billion of French FDI stock, making France the 6th largest foreign investor. The U.S. is France’s #1 source of foreign investment with $78 billion FDI stock.

French affiliated firms invest $5 billion in R&D annually. France is the U.S. #1 source of R&D in electronics and IT, while the U.S. is France’s #1 source of foreign R&D overall.

The information provided on this page is non-exhaustive and based on publicly available data, mainly from the U.S. Census Bureau and the U.S. Bureau for Economic Analysis, as well as publicly available corporate data. Sources and methodological details are available at the end of the full report.

To report any inaccuracy or for questions or comments regarding France’s economic footprint in the U.S., please contact washington@dgtresor.gouv.fr.