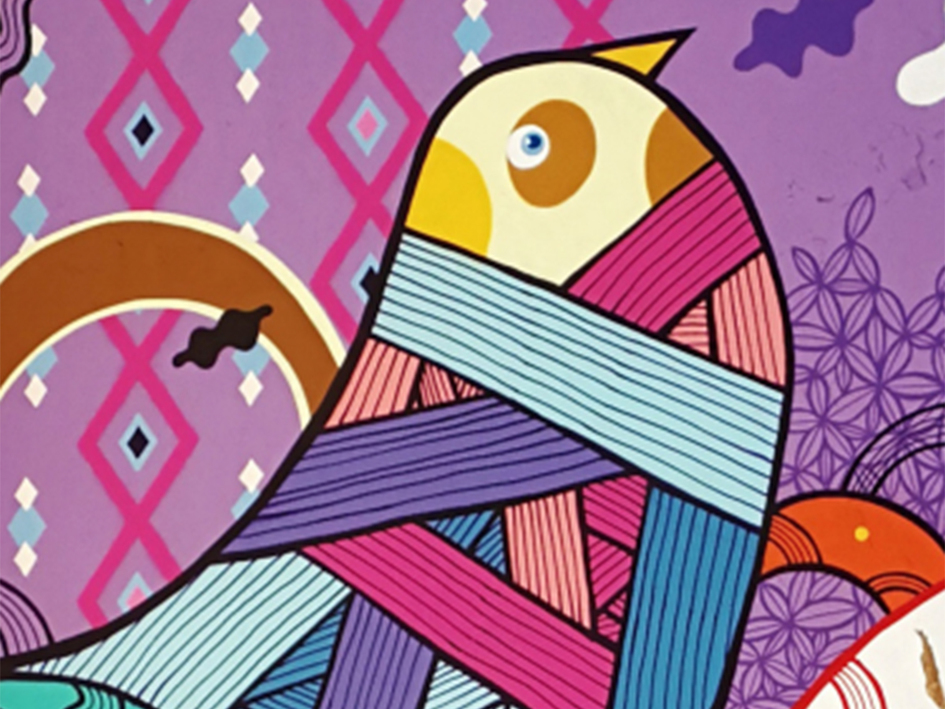 To commemorate the 300th anniversary of the founding of New Orleans, French artist Pablito Zago is collaborating with the Consulate General of France in New Orleans, NOLA Mural Project, KID smART and Hartwig Moss Insurance Agency.

From December 5th to 12th, 2018, Pablito Zago will transform the Hartwig Moss Insurance Agency building located at 2626 Canal Street into a colorful celebration of New Orleans.

A public unveiling will take place on December 14th from 3 to 6 p.m.

Pablito Zago was one of many candidates who responded to a call for artists in France to create a Tricentennial mural and illustrate our historic and cultural ties. His mural, titled 300, “is a simple hand drawn message made up of all that makes a country and a city: interlocking stories, cultures and ambitions that together create a unique identity”.

Inspired by his work, thirty middle-school students from Esperanza Charter School will work with artist Gretchen Weller Howard to use the skills they have learned in their KID smART classes to create their own mural adjacent to the large-scale work.

Robby Moss, President and CEO of Hartwig Moss Insurance Agency, is excited to have a new work of art on his company’s building. “The Hartwig Moss Insurance Agency has been part of the fabric of the New Orleans community for over 147 years. As we celebrate this historic time with our fellow New Orleanians, we thought this mural would be a fitting tribute to mark the occasion of our Tricentennial. In addition, we aim to beautify our neighborhood while contributing to the rich tradition of art in our city and its culture”.

In the absence of a clear, readable message, his research and graphic concepts are perhaps better described as a form of poetry allowing the viewer to ascribe their own narrative and comprehend the work in their own way. Today, he divides his time between mural creation, commissions for various galleries, illustration and graphic design with ArtistIk Kommando, and his travel journal project.

2016 opened the doors to prestigious collaborations and significant gallery presence in France and abroad. Pablito Zago became a spokesperson for Microsoft’s Surface Pro 4 computer and created an 800m2 (8600 sq. ft.) mural at the brands’ Paris headquarters. With his naïve, colorful, graphic, ever-moving work, he jokingly describes his creations as “illustrations for neurotic big kids”.

KID smART partners with New Orleans public schools to blend art with academic lessons to make classrooms more effective and joyful places to learn. In April 2019, KID smART will celebrate 20 years of integrating the arts into 40+ New Orleans schools. Over the past two decades, KID smART has worked with over 30,000 students and trained more than 5,000 local teachers in arts integration strategies.

The mission of Nola Mural Project is pretty simple. We believe that vibrant, diverse art makes for vibrant, diverse neighborhoods. As a means to that end we are pairing street artists with walls. No bureaucratic advisory panels, review boards, or committees... just artists creating their work and New Orleanians who support the arts helping make it happen.