Join us for a presentation on the life and work of Françoise Gilot, Picasso’s muse and world-renowned artist with a special connection to New Orleans. 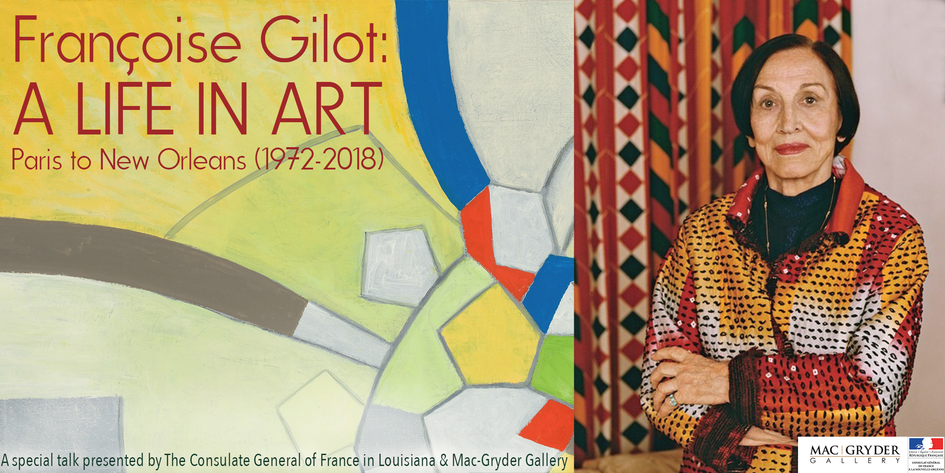 French modernist Françoise Gilot (b. 1921) occupies a unique niche as a female giant of the art world. Her extensive oeuvre comprises more than 6,000 paintings as well as drawings and printmaking works. At 96, she remains one of the most exciting and collectible artists of the 20th and 21st Centuries.

Gilot has enjoyed a long affinity with New Orleans, visiting many times, and her work has been represented here since 1972. Her current gallerists, Jill McGaughey and Garlyn Gryder, co-owners of Mac-Gryder Gallery, will speak about her longtime connection to New Orleans, how it began and why it endures.

Françoise Gilot’s career has spanned eight decades and her work has been included in museum collections and exhibitions worldwide. Her well-documented oeuvre comprises more than 6,000 paintings as well as drawings and printmaking works, and she has designed theater sets for the stage and ballet productions. She has published several successful books including "Life with Picasso" and "Matisse and Picasso: A Friendship in Art." In 2012 she was made a Chevalier of the Legion of Honor by the nation of France.

Gilot has been interviewed twice by Charlie Rose, was the subject of a recent CBS Sunday Morning segment, and features heavily in the current National Geographic Television series Genius: Picasso.