The Ambassador of France in the United States, Hon. Gérard Araud, made his first official visit to Louisiana on Monday, Feb. 22. During this trip, the Ambassador highlighted the rising success of French immersion education throughout the state, as well as the vibrant growth of commercial trade and economic partnerships between France and Louisiana, and the continued revitalization of New Orleans.

The Ambassador made his first stop at the Lycée Français of New Orleans, a public French immersion charter school. Principal of the school, Mr. Keith Bartlett, and Director of Academics, Ms. Marina Schoen, greeted the Ambassador, along with an assembly of fifth year students, who offered a rousing performance in French of the school’s anthem, as well as Edith Piaf’s iconic song, “La Vie en Rose”. A private meeting followed with the Superintendent of Education for Louisiana, Mr. John White. 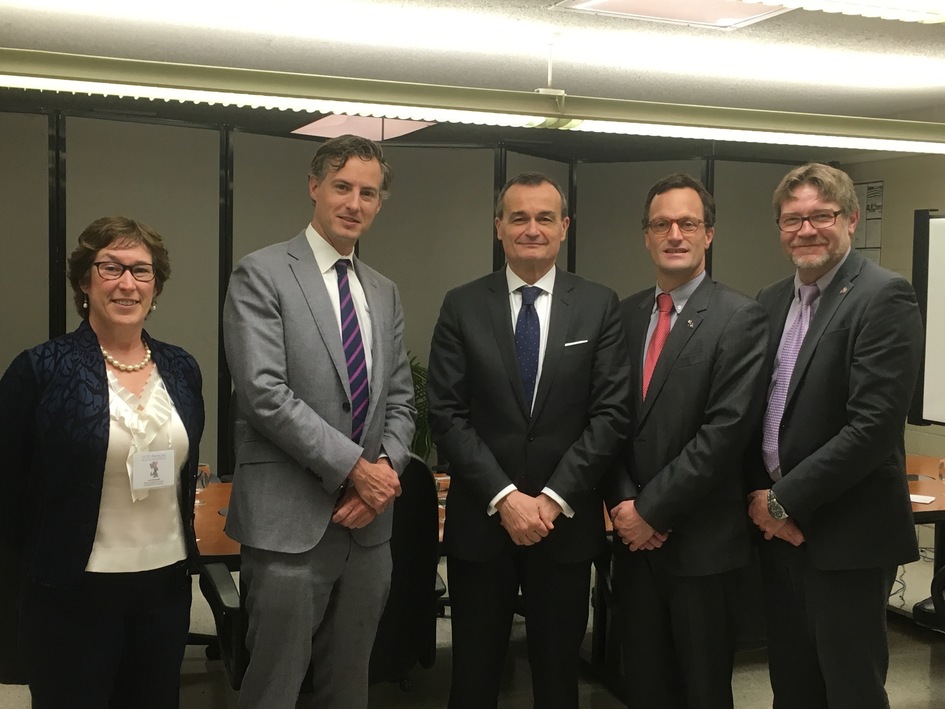 The Lycée Français, which currently provides immersion education to 632 students, is expected to become the first public French immersion high school in the United States by the 2022-23 school year. 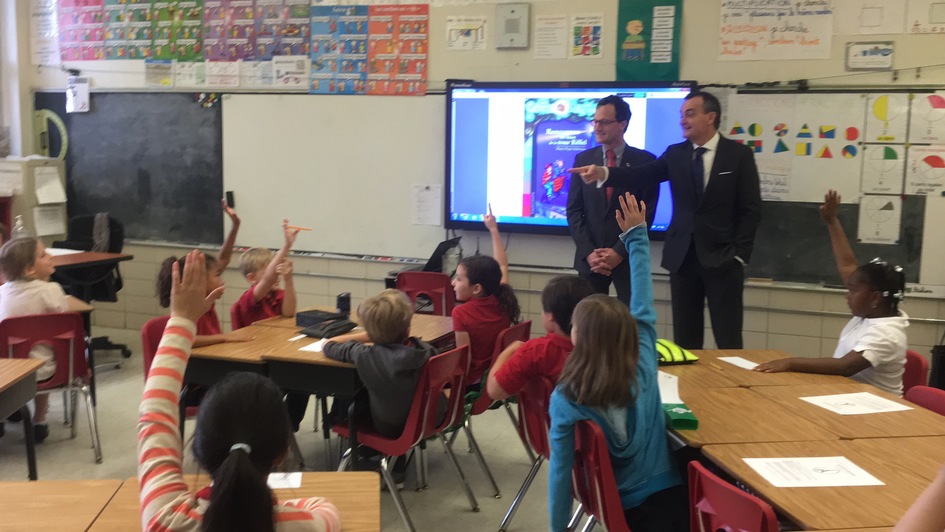 The Ambassador next toured an RTA streetcar station operated by Véolia/Transdev. This visit, which began with a streetcar ride on Carrollton Avenue, was led by Mr. Mark Joseph, Chief Executive Officer of Transdev North America, Inc., and Mr. Justine Augustine, Vice President of Transdev and RTA General Manager, who underlined its historical and economic significance to the city.

The New Orleans streetcar, which dates to the late 1800s, is the oldest continuously operating passenger street railway in the world. The Regional Transit Authority (RTA) was established in 1979. Mr. Augustine was awarded the National Order of Merit in April 2015 by Deputy Chief of Mission Frédéric Doré for his successful implementation of a public/private operating partnership with the French company, Véolia, in September 2009. 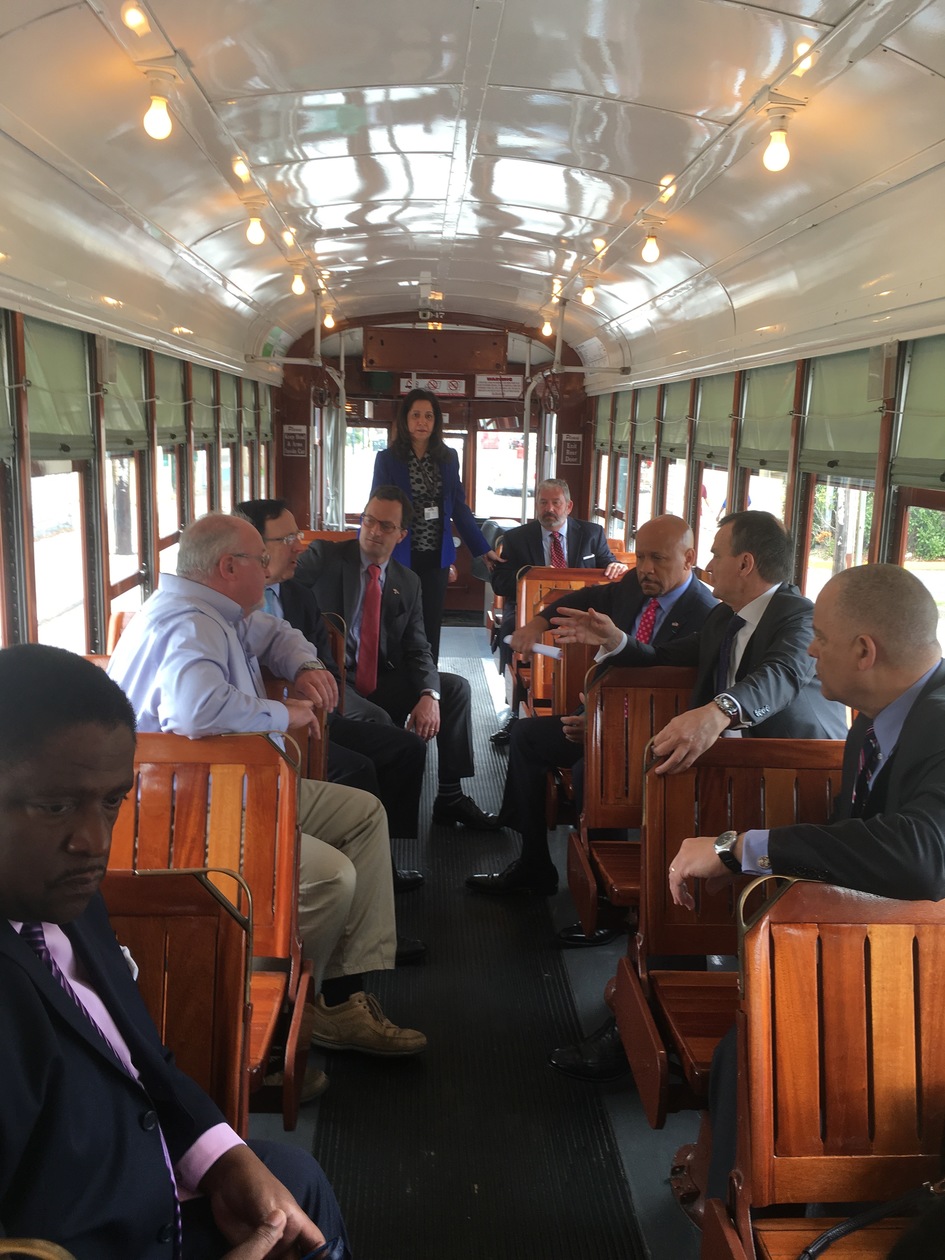 This tour was swiftly followed by a luncheon at Arnaud’s Restaurant, hosted by Mayor Mitch Landrieu. Guests included members of the City Council and other city officials, the Chamber of Commerce and business leaders including those of French companies. The Mayor acknowledged the significant historic and cultural ties between France and Louisiana, as well as France’s contribution to the revitalization of the city following Hurricane Katrina. The Ambassador and Mayor Landrieu also discussed the upcoming Tricentennial celebrations in 2018. 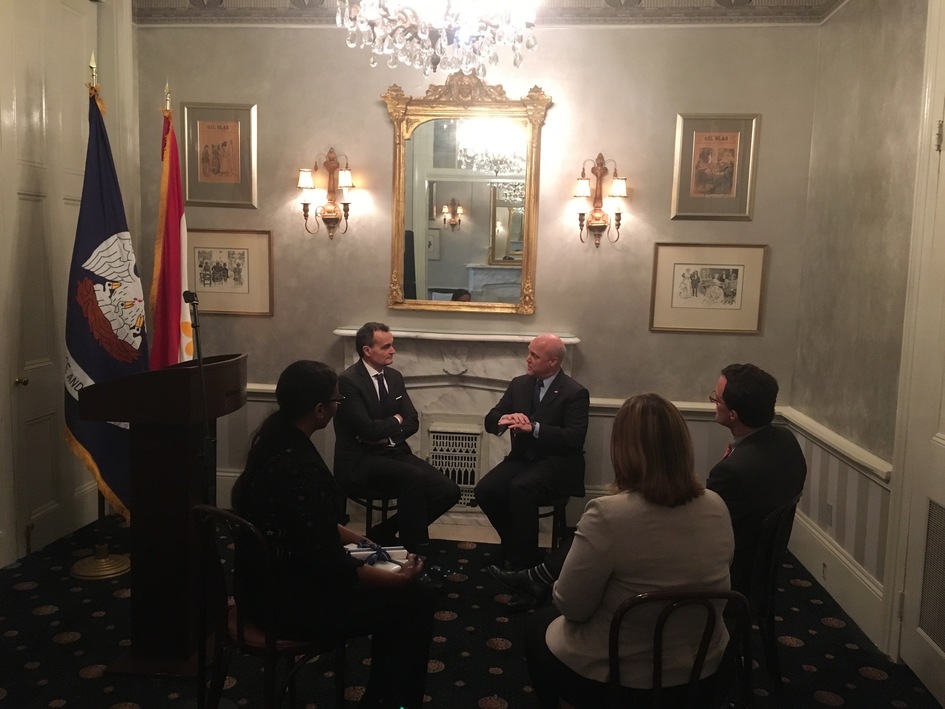 Following a brief media availability, the New Orleans Redevelopment Authority (NORA) and Chief Resilience Officer, Mr. Jeffrey Hebert, guided Ambassador Araud on a post-Katrina rebuilding tour. This unique view of the city outlined post-flooding reconstruction efforts and pointed to major innovations made by the City since 2008. 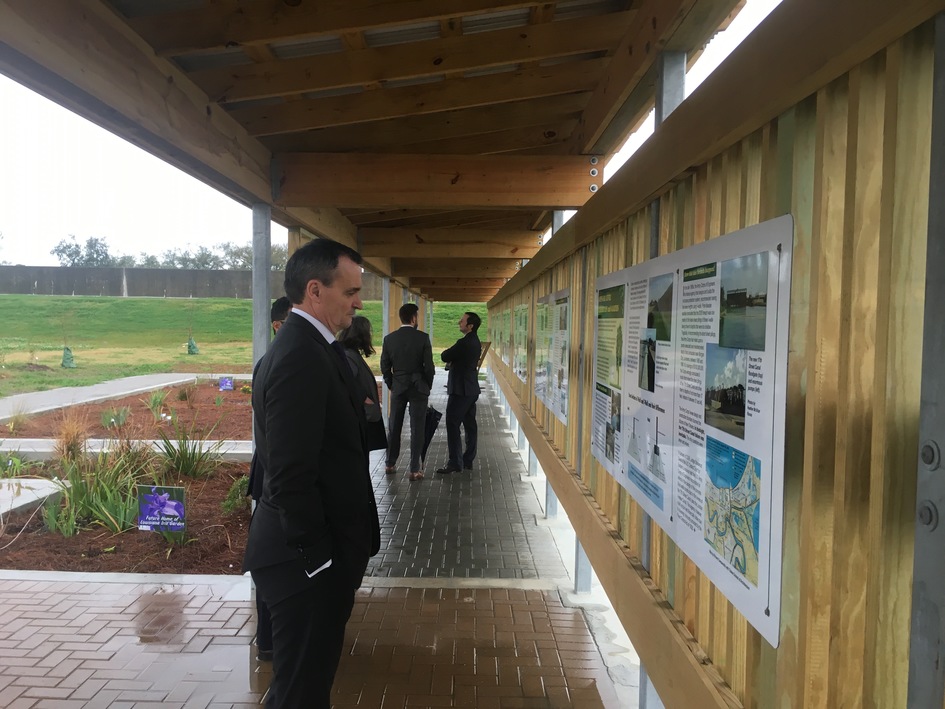 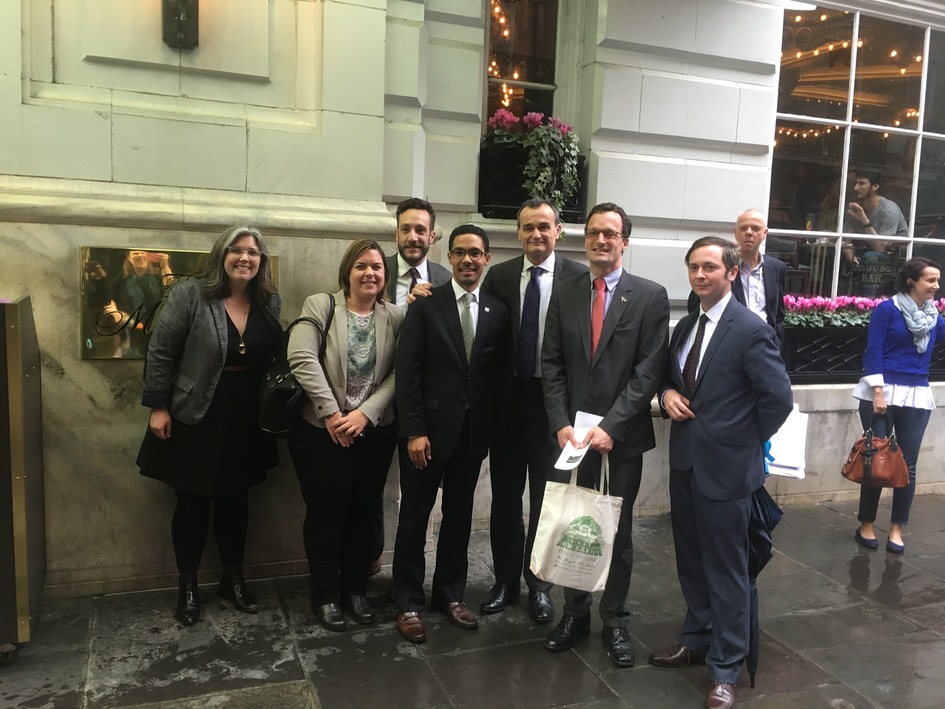 Finally, the program concluded with a reception hosted by the French-American Chamber of Commerce (FACC) at the Degas House on Esplanade Ave. During the reception, the Ambassador honored Mr. Eric Belin, President of the FACC, and Ms. Kristie Holm, Attorney and Special Counsel to the Consulate General of France in Louisiana, with the National Order of Merit (Ordre national du Mérite), in the rank of Knight (chevalier), for their service to France. 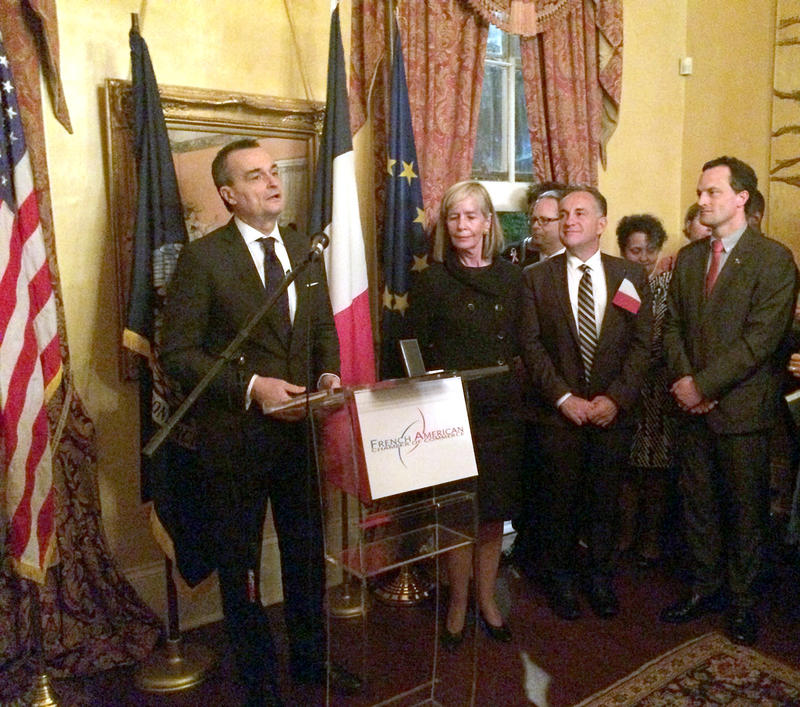 Due to extreme weather conditions, the Ambassador’s program in Baton Rouge, scheduled for Tuesday, Feb. 23, was cancelled. However, Ambassador Araud anticipates a return trip to Louisiana in the future. 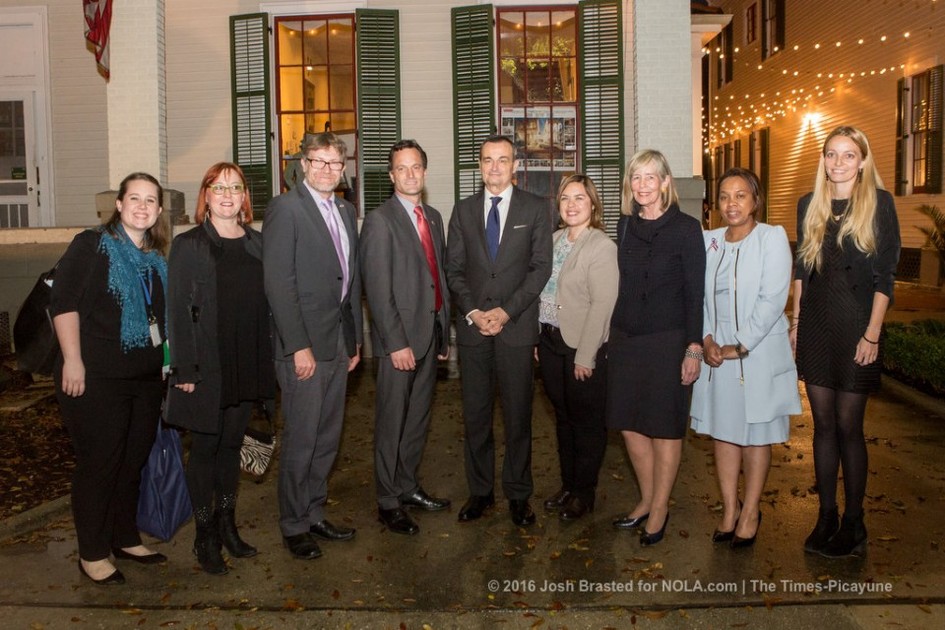 In the News!: The Visit of the Ambassador of France