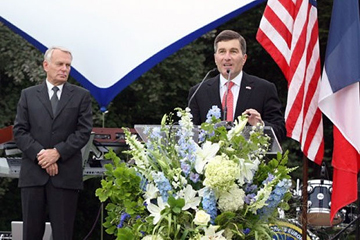 Three days after his inauguration, François Hollande flew to Washington for his first visit outside of Europe as President of the French Republic, after having met the German Chancellor on the very evening that he had taken office.

Last week, I joined many of you to say goodbye to the Ambassador of Germany. So it’s no coincidence that I’m with you today in order to celebrate American Independence Day.

Indeed, France and the United States have a great deal in common.

firstly, a shared history, and I would like in this respect to remind you of the journey that Benjamin Franklin began in December 1776 in order to forge contacts with France, a country of Enlightenment, with an enthusiastic welcome by the people of Nantes;

secondly, the values of freedom and democracy that confer on our two countries a special responsibility and a duty to convey a universal message;

lastly, the capacity to endure major ordeals together and to always end up working together again, even when we have differences, and that can happen between the closest of friends. This exceptional advantage is never outdated. Thanks to this unique relationship we are able to respond together to the challenges facing the world today.

As I indicated yesterday to the National Assembly in my general policy speech, France is engaged in reform efforts in the area of justice. This goal can only be achieved if we manage to reorient Europe toward growth. We took a decisive step along this path at the European Council on June 28 and 29, with all our partners.

At the G8 in Camp David and at the G20 in Los Cabos, we found in the United States an ally that is convinced that the need for budgetary discipline, although necessary, is not enough. We must continue our efforts to foster the increased level of international coordination required as a result of the major global imbalances. These are to blame for this never-ending economic and financial crisis; it would be simplistic to describe it solely as a European problem. We are counting on the United States to accomplish their part of the task, as well as to advance, together with us, the principle of fair trade.

While the spiral of repression and violence is still ongoing in Syria and Iran continues its headlong rush to acquire military nuclear capabilities, no solution can emerge without close collaboration between our two countries and without their capacity to involve the rest of the international community. In this respect, I welcome Hillary Clinton’s participation in the meeting of the Friends of the Syrian People Group in Paris on Friday which will help to increase the chances of ensuring that a political transition process takes place in Damascus.

I don’t want to finish without mentioning France’s unfailing solidarity alongside the United States. That’s what drove Lionel Jospin’s government to immediately position itself alongside you on September 11, 2001, when America was attacked. Terrorism - all over the world and today in the Sahel - continues to threaten our most essential values and demands unwavering determination.

And it’s also this solidarity that leads me to express to you the French government’s wholehearted compassion at the sight of the devastation caused by the fires and bad weather conditions that have hit your country so dramatically in recent days.

But to go back to history, Ambassador, I’d like to quote Franklin Roosevelt: “There are no two nations more united by the bonds of history and mutual friendship than the people of France and the United States of America.” It is toward them that my thoughts turn on this wonderful day to celebrate your Independence Day.

To all of you, best wishes on your Independence day!